Notice: Trying to access array offset on value of type bool in /var/www/wp-content/themes/Extra/includes/builder/functions.php on line 2367
 The Über Rockin' Guide To... Steelhouse 2022 - Über Röck

The Über Rockin’ Guide To… Steelhouse 2022

While it has always been posted as a classic rock festival, however, the organisers of next weekend’s Steelhouse have always tried to give younger up and coming bands a first appearance.  The first one of these I saw was the now rapidly rising Florence Black in 2015 and the high flying Those Damn Crows!  This year is no different. Whilst the classic rock element has definitely taken a turn for the better with the addition of Saxon, (following the withdrawal of Ace Frehley -again), there is something for everyone to get their (false) teeth into!

Friday is going to be a belter, Valhalla Awaits are a recently formed group from the remnants of Revoker, Dead City, The Blackout and Buffalo Summer’s lead singer Andrew Hunt. There is a seriously heavy vibe to their music. Don’t be late, you don’t want to miss this one.

Then there is a toss up between female-fronted Kira Mac‘s bluesy style but with some seriously heavy bassline/drumming on a few of their tracks and that of the pop rock female quartet The Hot Damn!, who feature previous members of The Amorettes and Tequila Mockingbyrd, to give you an idea of the style of music. With Welsh favourites Scarlet Rebels from Bridgend and the bluesy/rock-rooted London-based The Dust Coda, the first day is going to warm up nicely.

The main support for Friday comes from Myke Gray ex of Skin before the “voice of rock” that is Nathan James rocks the mountain with Inglorious.  Now, love him or hate him, you cant deny he can certainly sing. So, Friday is a damned good start for me, all we need is the weather… Last year there was a large “sun shelter” (but we know it was a rain shelter really!) towards the middle of the arena that provided seating and some respite from the front of the crowd.  This is a return feature this year.

Saturday kicks off with Mother Vulture, a bluesy/punky sounding four-piece from  Bristol, who could be an interesting start to the day. Anchor Lane are a three-piece from Glasgow who were just getting some serious traction when the pandemic hit. However, they have a new album out that I’m sure will feature in the set. A quick listen on Spotify means I’m likely to enjoy the set.

If you haven’t seen Cardinal Black yet but have heard of Buck and Evans you are in for an absolute treat. I first saw them supporting Those Damn Crows in Cardiff Castle last year: these guys are going to be HUGE! Don’t miss this set.

Black Spiders should have performed last year but the dreaded RONA got them; hopefully they’ll be OK for this year, altogether now “Kiss tried to kill me…”

Saturday is a great bill for me, and now the Finnish Von Hertzen Brothers have been added it  is even better. If you haven’t heard any of their music then ‘War Is Over’ was the album they had out when they played Steelhouse in 2017. If you are feeling a little emotional be aware that ‘All Of Sudden, You’re Gone’ may cause an emotional outpouring, so I would listen to it beforehand (and here you can do just that):

H.E.A.T continue the Scandinavian theme for the weekend, so expect a huge version of ‘1000 Miles’ and get ready to join in with the chorus: you WILL know the words!

How can you top that? Oh, I know: the Graham Bonnet Band doing a ‘Down To Earth’ Rainbow set and some new stuff from their new album ,there are going to be some very happy rockers up the mountain. Hopefully this will be the ONLY rainbow of the weekend!

All I have to say is thank the lord above for Saxon. Biff and the boys will tolling the bell on the final set of Saturday, riding like the wind before the 747 takes all the strangers off into the night. Hopefully it will be much drier than the last time Biff and the guys played in 2017 when it felt like the Dambusters would have been able to do their thing in the torrential downpour that accompanied Saxon that night.

Sunday is going to kick off with another up and coming solid rockers that are Ashen Reach, which will follow on nicely from Saxon as vocalist Kyle Stanley has a bit of a Biff sound to his vocals so I’m sure the “hangover” slot will be well filled by the Merseyside quintet, don’t miss this.

These Wicked Rivers are a band from Derby who just ooze blues-based rock. If you haven’t seen these guys you need to be on the field in time to get them.  You might even recognize the overly cuddly figure of Dale Tonks on bass guitar from a previous incarnation with Wolfjaw who sadly lost Tom Leighton in 2021.

King Herd are a recently formed four-piece from Birmingham with an alt-rock feel and new music out soon. Check out Remedy on Spotify if you want to know what to expect. If you like your metal as heavy as lead then ÜR 2021 ‘Album Of The Year’ winners Green Lung are your set to watch out for on Sunday afternoon; deep head banging bass lines and vocals that are reminiscent of early Sabbath. If you don’t believe me listen to ‘Let The Devil In’:

Diamond Head follow the heavy with NWoBHM, as black and as heavy as a truck load of coal. How can you follow that other than with an Orange Goblin? Heavy metal at its best.

Main support for Sunday is the one and only Michael Schenker, ex-guitarist of  UFO, presenting guitar wizardry at its best.

To complete the lineup of European (and Scandinavian) representation its another trip up the mountain for Joey Tempest and the guys of Europe. Altogether now, kazoos at the ready… It’s the ‘Final Countdown’ on the 2022 iteration of Steelhouse.

Another brilliant line-up this year, which you can sample further with our special Steelhouse playlist. Well done Maxx Rhead and Mikey Evans. Now, can we have a little chat about next year?

Everything else you need to know… 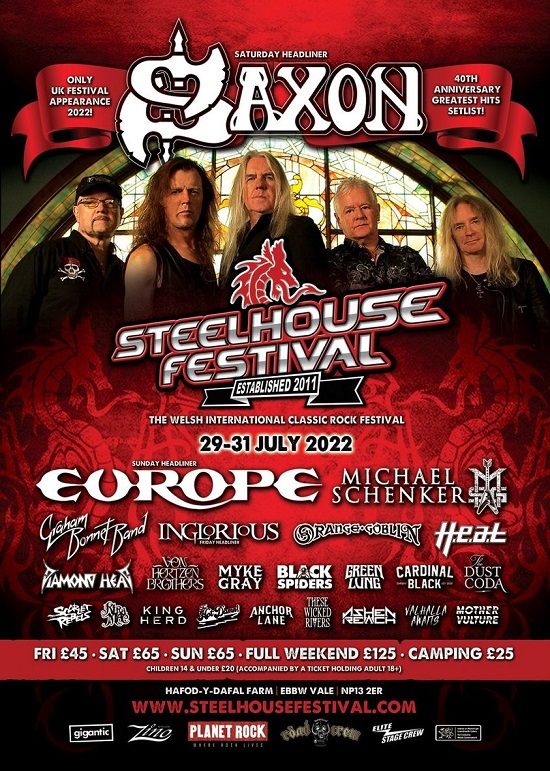