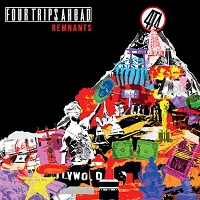 Sometimes you get the most unexpected pathway into liking a band. With me, when it comes to Four Trips Ahead, it was a case of their label owner Torsten giving me permission to use releases on his label as background music on my Twitch streams. I went through all the label’s previous releases, came across this band and immediately thought, “they are actually REALLY good”, to the point that I now use ‘Step Into My World’, from their previous release ‘… And The Fire Within’ as my opening track every stream, and thus a fan was born in me.

Having been a rather avid fan since, I noticed the title track from this EP being released as a single and jumped on it straight away and have been enjoying that since its release, so have been awaiting this EP rather eagerly. Musically, it continues on from the fine work of the previous album, with some rather fine progressive-orientated melodic hard rock spewing forth from the talented four-piece. Brian and Dan’s guitar and bass work (respectively) interchanges well, with both taking turns to harmonise and lead at different times, while drummer Ken turns in yet another performance that demonstrates quite what a talent they all are, both individually and collectively.

The two singles so far, also the first two tracks on the EP, both show quite how well the band have measured in their years together at this point, with a clear level of both understanding and comfortableness demonstrated in their songwriting. I was actually surprised, when first finding Four Trips Ahead, that they aren’t a five-piece, given how cleverly the guitar and bass work together, both in layering and sheer ability and technique – themes which are definitely continued through both the ‘Remnants’ and ‘It’s Alright’ singles, as well as the rest of the EP.

I actually left vocalist Peter’s comments until now for good reason, as he shows repeatedly just what a natural talent he is. I am actually struck hearing his voice in the same manner as when I first heard Geoff Tate on Operation Mindcrime, with his power and range obvious in equal measure. While we get some excellent vocal harmonies too, which add even further depth of sound into each track, it does come across like Peter is almost playing with more than a few of the lines in different tracks, as he adds some grit in amongst the harmonies were required.

In short, this EP will almost undoubtedly be featuring in my end of year lists. You will find a slant towards prog without ever stepping too far away from a melodious heavy alt-rock musical output with each member demonstrating ample ability in their fields repeatedly throughout. I just have one question that has echoed through my mind since the first time I encountered them… how the fuck are they not bigger than they are?