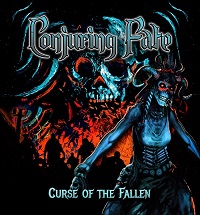 It is a generally accepted fact that second albums are extremely difficult beasts. A band spends years crafting their sound, honing their material to make the most impressive first impression they possibly can, and then feel pressured into maintaining the momentum by immediately getting back into the studio. Norn Iron metallians Conjuring Fate spent almost a decade building up to the release of their debut album, ‘Valley Of Shadows’, originally self-released in this corner of the Überverse before being picked up for wider distribution by the German Pure Steel organization. Fortunately, the County Antrim quintet have not made the mistake of rushing headlong into producing its successor – after all, it has been almost three years since that debut offering.

‘Valley Of Shadows’ came at the end of a period of change for the band. At one stage, they had threatened to implode, before re-centring themselves and consolidating with a new line-up. There have been further changes in the intervening period between the two albums, with drummer Bogdan Walczak having to return to his native Poland, to be replaced by Niall McGrotty. But the biggest change we see with ‘Curse…’ is the level of further progression which the band have made, how their sound has evolved and matured. The fact that they have not rushed into following up their debut is clearly evident, on every level, from the craftsmanship of the songs to the purity of the performances and deliveries. At the same time, there is a freshness and energy to the sound which they have managed to produce – something which can probably be attributed to the fact that most of the tracks were laid down in single takes in guitarist Phil Horner’s shed studio.

There are very strong connections to the first album, not least in the band, or at least frontman Tommy Daly, continuing to take their inspiration from the horror movie genre. As if to prove that ‘Curse…’ is almost a sequel to ‘Valley…’, the connection is made right at the start of the album, with opener ‘Burn The Witch’ being a direct follow on from ‘Backwoods Witch’ (which originally featured on the band’s debut ‘House On Haunted Hill’ EP, which in turn was appended to the subsequent full-lengther), as the victims return to the forest to take their revenge on the lady in the title of the former track (who, we must stress, is not The Dark Queen!).

Almost as immediately evident is this album’s clarity of purpose. The performances are tight and focussed. McGrotty’s percussive drive is taut and precise, moving swiftly from rich tonality through to blasting beatdowns with the ease of Jonny Rea roaring to another world championship, while Steve LeGear’s bass lines rumble densely in the background. The twin guitars of Horner and Karl Gibson bounce off and around each other, perfectly complementing on the rhythm sections and then pushing themselves to the limits on the solo sections, while at the same time retaining those all-important harmonies and melodies with an effortless ease that so many acts lack, at the same time reflecting the latent, natural energy of their live shows.

The big surprise, however, is Daly’s vocal. All I can say about it is “wow”. There is a combination of grit and clarity, a sense of the singer pushing himself to his limits. If I had one criticism of ‘Valley Of Shadows’ it was that I felt that Daly was capable of a much better performance: on ‘Curse…’ he delivers it, and consistently across all ten tracks.

‘Curse Of The Fallen’ is an album that will appeal to all fans of classic heavy metal. It is an album with some truly memorable moments, such as ‘Burn The Witch’, the surprisingly atmospheric ‘Daughter Of The Everglades’ and the edgy, Saxon-esque ‘Night Of The Knives’. It is a metal album produced by metal fans for metal fans… and you really can’t say much better than that, other that “buy it”.

The Dark Queen recently sat down on the other end of a Facebook chat connection to talk to Phil and Tommy from CF about the album, the creative process behind it and their future plans, as well as some other oul shite (as we say in this corner of the Überverse):