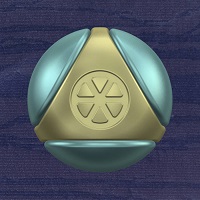 Language, by it’s very nature, is an invention which has helped mankind communicate with one another. it can be corrupted and pure. It can be interpreted – and misinterpreted in equal measure. It has been invented and re-invented many times over. Many people have created their own languages: L. L. Zamenhof, for example, with Esperanto; J. R. R. Tolkien with elvish; Gene Roddenberry with Klingon… I could go on… But, what has this got to do with an album review, I hear you ask. Well, I’ll tell you…

The titles of the eight tracks on this, the latest offering from Swiss multi-instrumentalist and all-round smart arse Ronald Bühlmann, are all what he himself as “fantasy words”, each made up to reflect the feel and theme of the tracks concerned. Thus, for example, ‘Sevamçāo’ is a “pseudo-Portuguese” expression of its overall bossa nova groove and vibe.

In terms of prog rock, Bühlmann doesn’t speak a different language, instead ploughing tried and trusted furrows, but at the same time adding his own twists to the ambient moods he generates, with the use of violin (courtesy of the inimitable and prolific David Cross) and even a traditional Celtic carnyx, or war trumpet. His approach reminds me of that of jazz-prog composer Ron Geeson in his use of unusual instrumental interactions and apparently clashing sonics which are both dissonant and resonant in the way in which they bounce off and around one another before coming back to the chaotically controlled central theme.

In some ways, ‘Emnalóc’ is a disturbing album, as it is difficult to place it into a specific listening environment. Do you stick it on as background music while you get on with other things? Or do you sit down and listen to it intently and dissect every subtle nuance and stroke? Or do you simply let it wash over you and let you relax in the comfort of its embrace? The decision is yours, as I think all three scenarios are relevant.