The opportunity to see this would be my third castle gig over the past few years, Thunder and Black Stone Cherry at Caerphilly Castle being the others. Supported by one of the hardest touring bands from South Wales and a “new band” this was a bill too good to miss. One of the nicest days of the summer helped, given south-east Wales has been under a veil of cloud for the majority of August.

A grand entrance through the castle’s north gate via Bute Park added to the grandeur of the occasion.  The whole weekend was supported by Cardiff City Council with the independent venues of The Moon Club, Club Ifor Bach and Fuel benefitting from the profits and given the opportunity to showcase the variety of music put on in these venues. I found this fact a bit strange given that not two years ago these same venues had to protest against closure by the same authority. I wonder what has brought about this change of heart?

Anyway, enough of the politics… 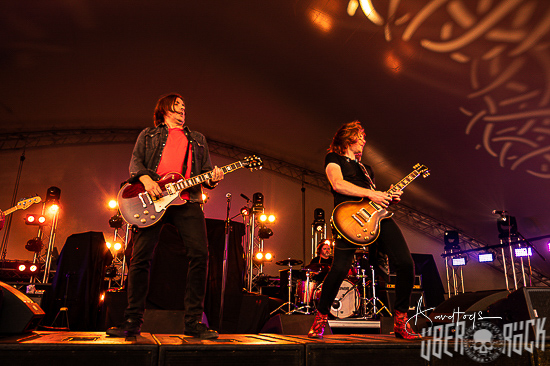 The show was opened by Scarlet Rebels, one of the rising NWOCR bands from Llanelli. With one album already under their belts and that history of hard touring to drive their performance, the Doyle brothers, Wayne (vocals) and Gary (drums) are very ably supported by Wayne Edmunds (bass) and Chris Jones (lead guitar) are usually supported by Josh Townsend on keyboards and guitar but this time it was only the four main protagonists on stage.  The last time I saw these guys they were known as VoiD but a plethora of bands with that name forced the change to the current one and the rest as they say is history.

With a new album forthcoming later in September, this was an opportunity to be showcased by the high-flying Crows on this bill. Boy did they grab the opportunity. Kicking off with Not the one was a great opener. I soon realised I know more of their set when Let Me In had me “singing along”.  Waynes vocals and the instrumentation is much akin to the sound of early phonics but his voice is not as gruff as that of Kelly Jones.  Chris Jones is a very good (and also very animated) guitarist who provides a good visual show, frequently rocking his blonde locks around to the music. The crowd readily joined in on some of the choruses and provided the band with the necessary energy to keep them interested in the set.  Great start to the proceedings. 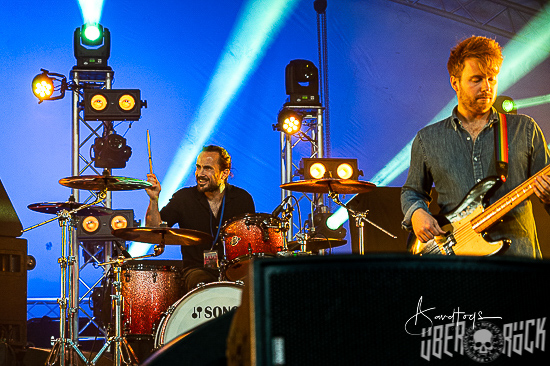 As the sun began to set over the castle keep, Cardinal Black took to the stage.  A side project of Chris Buck (Buck and Evans) and vocalist Tom Hollister this was their first gig-and WOW what a first gig. The guitar playing of Chris Buck is laid back, soulful and without comparison. His style reminds me of the late great Gary Moore, whilst there is no doubting his ability the style is languid with plenty of breathing space between notes. As Myles Davies once said, “It is not the note you play that makes is sound right but the note after it” – or, in this case, the space after it.

Buck is an amazing guitarist, and this vehicle is the start of something special.  Combined with the soulful vocals of Hollister, which are as smooth as warm liquid caramel, this is a band that could cross over into mainstream with the right track, there is absolutely nothing out there to compare.  With only one EP behind them, and the addition of a group of talented musicians including a very talented young lady on keyboards and another on vocals this band were rapturously received by the crowd. This calmed everyone down before the main act. Joined on stage by Adam Roberts (drums) and Sam Williams on bass this is an outfit to be followed, and I will. 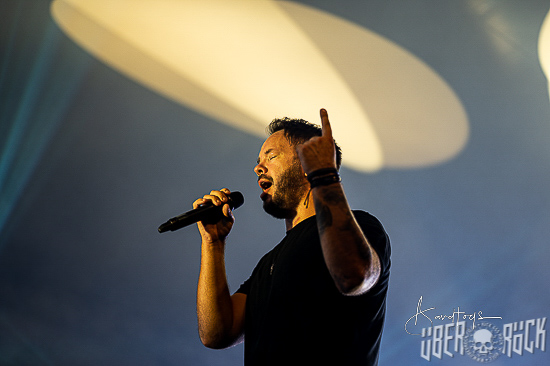 Another change over led to the call of the Crows and Shane Greenhall letting rip with “CAARDIFF AARE YOU READYYYY!” And a quick launch into ‘Who Did It?’, which was the thunderously received by the partisan 1500 “Crow family”.  All that was left to ask was that after destroying Download and slaughtering Steelhouse, did the Bridgend boys have the motive could they murder this crowd? We didn’t have to wait long to find out…

Keeping the energy going, they rattle into ‘Long Time Dead’, ‘Behind These Walls’ and ‘Don’t Give A Damn’ – all crowd pleasers at any gig, but more so at this event. As ever Shane is like a jack in the box, barely standing still and climbing all over the stage and front row of the pit whilst giving the audience everything of himself.  Dripping in sweat and constantly getting encouragement (not that he needs it) from the crowd.

With two well received albums in the bag and new music on the horizon the switch between first and second album content was effortless.  Lloyd is like Tigger on springs, barely standing still on bass while his head is a serious contender for bobble head of the year. As a counter to this, Dave Winchurch and “Shiner” Thomas barely move as a counterpoint to all the activity.  Ronnie Huxford sits at the back banging out the rhythms that keep everyone on time. 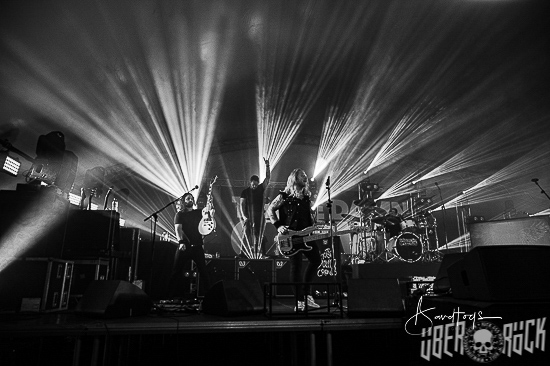 There is no doubt these boys are slick and have improved their stage setting since I did sound for them on the back of a flatbed lorry a few years ago; their will to play and entertain anywhere hasn’t been lost and the moving piano renditions of ‘Never Win’ and ‘Blink of an Eye’ always have the requisite emotional response from the crowd.

Winding up to the finale with ‘Sin on Skin’, ‘Say It’, ‘Send in the Reaper’ and ‘Go Get It’ reaches the climax of the set, when the crowd constantly join in with “rock and roll ain’t dead”.  However, to go back to my original question, they had the motive? They absolutely murdered it.  The Crows are flying high and deserve every success-see you on the next flatbed truck guys.