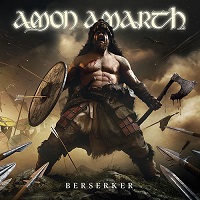 Next Friday (3 May) sees the return of Viking death metal legends Amon Amarth. The Swedish five-piece embark upon their 11th full length album and according to lead singer Johan Hegg, this is them at their refined best. Looking to push forward from 2016’s well received ‘Jomsviking’, ‘Berserker’ features twelve new tracks promising to deliver everything that fans of the band have come to expect and more. So, with long ships on the horizon and a new raid inbound, what can be expected?

Album opener ‘Fafner’s Gold’ kicks things off with a captivating acoustic guitar introduction. The melody builds, layering hooks before the full brutal force of the band hits home. The original acoustic lines are taken up by overdriven guitars and the rhythm section locks together to create a punishing foundation. Hegg’s vocals cut through the mix with his guttural vocals matching the aggressive attack of the instruments. It’s an impressive opener as the dynamics shift to create a constant flow drawing the listener in all the while unrelenting in its heavy groove. The rapid-fire tremolo picked riffs drive the track onwards before the breakdown led by the double kick drum storms in shifting the gears once more. The clean cut off from the outro of ‘Fafner’s Gold’ leads into the catchy drum driven groove of ‘Crack the Sky’.

This is the second single release from ‘Berserker’ and it’s an obvious choice as an appetiser for the album. The trademark Viking lyrical content of Amon Amarth is matched with their tight, aggressive riffs and rhythms that has won them so many fans. However, it also represents a definite progression to their sound from earlier releases. The melodies are more pronounced and cleanly executed. The duel guitar lines of Olavi Mikkonen and Johan Soderberg trade off from each other drawing more sonic interest and there is an anthemic sense to the chorus section that will surely see this track go down a storm with live crowds.

More evidence of the progression and refinement of Amon Amarth’s sound can be found in the likes of ‘Mjolner, Hammer of Thor’, ‘Raven’s Flight’, the semi title track ‘The Berserker of Stamford Bridge’ and crushing album closer ‘Into the Dark’. All of the tracks on this album represent the powerful attacking sound that has come to be associated with the band along with the ever-present Viking imagery conjured up by the titles and lyrics. However, with the likes of these tracks the listener is introduced to expansions on Amon Amarth’s musicianship and song writing. The twin guitar attack on ‘Mjolner…’ and ‘Raven’s Flight’ shows the more traditional side of heavy metal that influences the band. The harmonised lead lines combine with the driving rhythm propelled by the bass of Ted Lundstrom and drums of Jocke Wallgren creating a relentless melody that hooks the listener in elevates the feel of the music.

‘The Berserker of Stamford Bridge’ sees the band at their tale telling best. The lyrics of Hegg recount the historical tale of the lone warrior at Stamford Bridge holding off the combined English army as the Viking’s retreated in 1066. There’s nothing cheesy about the lyrical content of Amon Amarth, Viking history and mythology fits perfectly with the aggressive brutality of the music they perform and this track is no different. What is excellent is how they have created a dynamically shifting track with colossal power that sonically represents what the vocals describe. It’s one of the best crafted tracks on the album. ‘Into the Dark’ strips back some of the melody and harmony aspect that has been present throughout and dishes out crunching, brutal riffs combined with the savage intensity of the rhythm section to match the guttural vocals. After a symphonic soundscape created by piano and strings in the intro, a wash of overdriven guitars heralds the arrival of the full band. A wall of sound launches forward with all of the instrumentation going all in. The tempo is slower than other tracks creating a relentlessly heavy feel to the riffs and pounding drums, it’s more reminiscent of the band’s earlier work but still feels like they’ve created something fresh and exciting without recycling previous ideas.

The production of the album is crisp and clear. Throughout every track, every instrument is clearly defined, the vocals cut through with clarity and the dynamics of each track can be identified allowing for the organic flow of the music to be articulated. As a band they’ve always created a powerful sound with a clear melodic aspect. However, some of their more subtle details in song writing have, at times, been lost on previous recordings as not everything can be clearly heard. However, with ‘Berserker’ the mixing and production has allowed for all of the aspects of the Amon Amarth sound to shine through. In doing so it has opened up their musicianship and song writing to the listener. The production lends a huge anthemic weight throughout every track, this combined with the quality and execution of the music gives a vastly elevated feel to the album. Hopefully this will be translated when the record is taken on the road as there are many moments that lend themselves to a live experience and crowd participation.

There is something for everyone on this album. For pre-existing fans, the tracks here will confirm what they already knew; that Amon Amarth are comfortably one of the best metal acts around at the moment and are capable of writing great music. However, they can also expect to be impressed that the band have created something sonically different and refined from earlier recordings. They’ve shifted gears from their previous albums and even from ‘Jomsviking’, ‘Berserker’ represents a step up. No easy task for a band 25 years into their career. It’s great to see that they are looking to push onwards rather than regurgitate ideas as it would surely be an easy pitfall to play it safe (how many more Viking lyrics and chugging riff variations are there?!). For someone looking to get into the band, these twelve tracks are a perfect introduction. There’s all the elements of the band’s style: Vikings, huge harmonies, colossal riffs and head banging rhythms. ‘Berserker’ brings all these elements together in some of the best work that the band has written to date. For every other metal fan; the album is just excellent, hard hitting, head banging heaviness. Raise your horns to Odin and get involved!