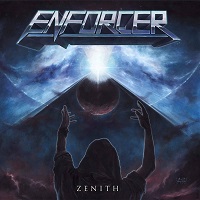 I first came across Swedish NWOCR cheerleaders Enforcer back at the turn of the decade, while hunting through the shelves of my local record store on my lunch-break. The owner, Gary, recommended that I check out this new album called ‘Diamonds’: what had broad it to his attention was the fact that it had just been released on Earache, a label better known at that time for the more extreme end of the heavy metal spectrum, but which had recently taken the bold step to diversify its roster… Anyway, almost a decade down the line, and with ‘Diamonds’ still a favoured play on ye olde death decks, Enforcer are back with their fifth album, and their first in four years.

To be honest, apart from yet another line-up change, nothing has really altered in the nigh on a decade since I first crossed paths with the band: their sound is still very much rooted in the NWOBHM/late ‘80s Euro metal sound, with the emphasis on fast and furious riffing, huge harmonies, massive melodies and more gang vocals than a Welsh rugby team on a roadtrip. This is evinced right from the off with lead single ‘Die For The Devil’, which also highlights the band’s clever use of tongue-in-cheek lyrics, and the punchy sub-epic ‘Zenith Of The Black Sun’, which is built on a nice, traditional metal riff that takes no prisoners as it gallops along Maiden style, driving the song forward with confident aplomb.

‘Zenith’ does have its cringeworthy moments: very cringeworthy ones in fact. ‘Regrets’, which sees them stray inevitably into power ballad territory, sounds like one of those vomit-inducing Eurovision Song Contest null pointers: honestly, I nearly regurgitated my lunchtime cider, and that would have been alcohol abuse (as DQ so eloquently puts such things) – but it no doubt I’ll be proven wrong when it gets the lighters waving and female fans wetting their panties in the live arena! Thankfully, the balance is quickly (well, six minutes later) restored with ‘The End Of A Universe’, which comes across like Europe on steroids.

Overall, this is the sort of album that is not designed to be taken too seriously, but very much at face value. It’s good, solid heavy metal, very much rooted in the old school of the genre, and enforcing (sic) all the values you would expect of a band paying homage to its roots while ensuring that it remains alive, vibrant and, above all, relevant in the 21st Century. Raise your horns!