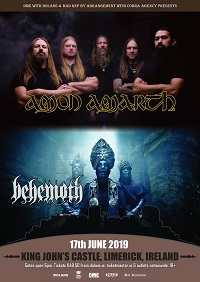 In what promises to be the metal event of the year in Ireland, Amon Amarth will team up with Behemoth for a very special outdoor show at King John’s Castle in Limerick on 17 June.

Amon Amarth recently completed work on a new album, due for release, this Spring whilst Behemoth continue to tour in support of their recent ‘I Loved You At Your Darkest’ album.

King John’s Castle – or Caisleán Luimnigh in Irish – is a 13th-century castle located on King’s Island in Limerick, Ireland, next to the River Shannon. Although the site dates back to 922 when the Vikings lived on the Island, the castle itself was built on the orders of King John in 1200. One of the best-preserved Norman castles in Europe, the walls, towers and fortifications remain today and are visitor attractions. The remains of a Viking settlement were uncovered during archaeological excavations at the site in 1900.

Tickets for this very special co-headline show will cost €49.50 and go on sale at 10am next Thursday (7 March) via dolans.ie, ticketmaster.ie and usual outlets across Ireland.