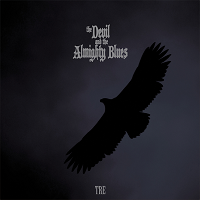 Taking their musical cues from heavy weight blues rock legends and putting a modern twist on things, Oslo five-piece The Devil and the Almighty Blues have come forward with their latest offering.  ‘Tre’ features six fresh tracks of heavy hitting, raw and melodic blues-based rock. Since their inception, The Devil and the Almighty Blues have been steadily been making a name for themselves through both record releases and regular touring. This latest release ties in with yet another tour, will this new record enable them to extend the fanbase further?

Opening with ‘Salt the Earth’ the listener is greeted with a deep brooding bass riff. Almost stoner rock like in its delivery, the riff is picked up by overdriven guitars and layered further. The riff becomes hypnotic with its relentlessness before the remaining instrumentation kicks in fleshing out the texture and providing the framework for the vocals. As the track develops the vocal melody cuts clear through the top of the mix and the whole track has a catchy melodic feel to it while retaining a darker rhythmic edge. Coming in at over twelve minutes, it’s a bold opener as it’s the longest track on the record. However, it doesn’t get bogged down. Themes are repeated such as the intro bass riff, but they are developed to add sonic interest and keep the music moving. In addition, the dynamics shift, when the vocals drop out, the whole instrumentation backs off to rebuild once more for the outro. ‘Salt the Earth’, showcases what the band are all about for new listeners as it contains all the heavy blues themes that the band take as inspiration while delivering their own take and adding in new ideas.

Featuring layered vocals for the intro, ‘One for Sorrow’ leads off from the opener. With a more rock feel with a raw edge to the lead vocals but retaining a driving blues rhythm.  The dynamics rise and fall giving the song added structure and depth before the tempo picks up at the mid-point. A full wall of sound from the band backs up a well-crafted rhythmic guitar solo. ‘Lay Down’ features a prominent catchy groove to drive the music forward. With a big reverb wash on the lead vocals there’s a sense of space created coupled with a sense of building tension from the instrumentation. The pressure release comes in the latter part of the track, as the rhythm section holds down the powerful groove, the lead guitar lines cut through the mix to deliver a highly emotive solo. The outro sees the full band and vocals kick back in together for a final refrain.

The latter part of the record continues in the same vain as what has gone before. ‘Heart Of The Mountain’ starts with a more sedate but still driving rhythm that then grows and develops into an all out stomper of a blues rock number. Heavily overdriven bass and guitars share the riffs, the drums anchor the track and both the lead guitar and vocals cut through the mix with clarity delivering powerful moments to accentuate the ongoing rhythm. The final guitar solo leads the track to it’s crescendo and the wall of sound fading out to the end.  Drum and bass led ‘No Man’s Land’ provides the penultimate track. Following an infectious groove intro, the track moves into a driving rock ‘n’ roll rhythm punctuated by reverbed guitar chords giving a western/rockabilly like feel. One of the shorter tracks on the record, it represents a slight departure for the musical delivery but still retains a heavy blues influence with a stoner rock edge.

Album closer ‘Time Ruins Everything’ is a slow burner to see out the record. The intro features a sparse texture of guitar chords before the rest of the band comes in. The vocals, once again clear in the mix, cut through with a raw energy giving an angry edge backed up by the brooding riffs. The dynamic movements create a stop start nature as the track builds and develops growing in intensity before falling away.  Riff themes are repeated and layered up to add further sonic interest and propel the music onwards to a searing guitar solo in the final half of the track. The closing crescendo features a full instrumentation climax repeating the initial riff and the rhythmic drive with the vocals calling out ‘Time Ruins Everything’.

‘Tre’ backs a weighty punch for only six tracks. There’s some bold ideas put forward by The Devil and the Almighty Blues, not least the track lengths. However, this gives the music more room to grow and develop as well as have a more organic feel.  The heavy blues influence is undeniable and hits the listener square on right from the outset. If there is criticism to be found, it could be argued that there are moments when riffs and rhythms are repeated too often and the tracks become stagnant before a new idea moves the music forward.  It is also possible to suggest that the tracks occasionally lack direction and become more of a jam.  However, there is undeniably great musicianship on show in ‘Tre’ as well as good song writing, the structures of the tracks are there and do move the tracks on a clear path.  If you’re looking for solid heavy hitting blues delivered with groove and melody, any such criticisms won’t matter because that’s exactly what The Devil and the Almighty Blues have delivered. The six tracks on ‘Tre’ would fit comfortably in any rock fans collection and offer up a way to lose oneself in the power of blues.