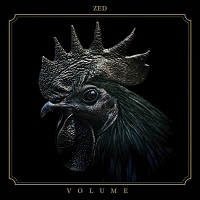 The beginning of 2019 saw Zed re-release ‘Desperation Blues’ via Ripple Music. A great way to kick off the new year for the Bay Area based four-piece. Now the heavy blues driven rockers are back with a brand-new album. ‘Volume’ features ten fresh tracks laden with Zed’s trademark sound. Over the past few months the band have teased updates on both writing and production for the record and have been steadily building a healthy buzz around what is to come.

Kicking things off is ‘The Other Kind’. Opening with colossal sounding distorted guitars and attacking drums it’s a riff driven stomper to introduce the new album. The vocals cut through with a raspy blues edge that convey a raw power to match the energy of the instrumentation. The track flows with well based dynamics indicating the structural shifts and rising in force and texture for the chorus and breakdown sections. It’s a catchy track with memorable hooks and riffs that not only serves as an excellent way to start the album but will surely go down well in a live environment. Hot on the heels of the opener is ‘The End’. Opening with a similar powerful start to the previous track, the verse section dials back the attack allowing the cleaner vocals to take central focus. Once again, a highly infectious track, the chorus lift takes on an anthemic edge thanks once again to the dynamic lift and heavy guitar riffs. The rhythm section locks down a tight groove anchoring the drive of the track allowing the room for the guitars to not only provide the chugging riffs but also let loose on the lead work. The vocals as mentioned, take on a more central role as the wall of sound is dialled back in the verse sections but for the outro everything comes together for a power-driven assault.

‘Wings of the Angel’ takes on a more stoner rock like groove compared to the opening tracks. With chorus and reverb effects used on the guitars creating a swirling sound to the riffs. The bass and drums are once more the driving force, yet with a slightly more sedate tempo they accentuate the stoner/blues vibe. Once more the bluesy rasp of the vocals cuts through the top of the mix complementing the work of the instrumentation with a charged delivery. It’s a solid mid-tempo number that gives the album a slight shift from the attacking opening tracks. ‘Hollow Men’ picks up on the stoner vibe from the previous track but adds more of the up-tempo vibe from ‘The Other Kind’. A big sounding catchy chorus with pounding rhythm section and charged guitar riffs is complemented by a brooding, slow burning like verse section so that the shift is not only more pronounced but gives a sense of tension release as it lifts. There’s a lot of the blues laced groove that Zed have established as their core sound and it’s very well executed on this track.

The slow burner of ‘Take Me Home Again’ offers the listener a brief respite from the pounding drums, chugging riffs and full on groove edged rock ‘n’ roll.  Beginning with a simple sounding guitar lines accompanied by laid back drums and bass the track progresses into a reflective sounding number. The vocals are given a reverb wash creating an echoing sense of space. The blues vibe is still very much central with the guitar lead lines complementing the vocals delivery with the note bends emulating the vocal emotion. The chorus sections lift slightly with a dynamic shift upping the texture as all the instrumentation pulls together with the vocals sitting atop the mix. It’s a track that showcases not only the musicianship but also song-writing of Zed as it conveys a wealth of power and emotive drive without having to rely on sheer volume and a thick textured wall of sound. Both the vocals and guitar are given the space to produce a quality blues number while the ever-present tight rhythm section is laying a foundation groove.

As the album moves into its latter half the listener is introduced to ‘Chingus’ the track currently being teased by the band on social media. The track is set to feature an accompanying video of Lego animation of the band and features mini cameos of other bands. Definitely worth checking out. It’s a solid catchy number that provides a great example of Zed’s style. With a driving blues groove, big riffs, engaging vocals and not to mention being highly infectious from start to finish. This out and out rock ‘n’ roll foot stomper provides a solid single choice for the album.  There’s still more to enjoy as the album heads towards the close. Tracks like ‘Poison Tree’ and ‘The Great Destroyer’ take on more of the heavier side of Zed’s sound. The former returns some of the previously heard stoner like vibe but there’s a heavier stance taken with the delivery that turns it into a headbanging friendly number throughout. As the track proceeds to its close, the tempo and aggression are ramped up as the guitar solo lets loose and the wall of sound comes together to push the outro. ‘The Great Destroyer’ as the name might suggest takes on the heavier edge and delivers it with gusto. All of the previous elements of Zed’s sound are present.  With a solid, brooding bass driven breakdown that opens out into a wah pedal guitar lead rapid paced rocker, this will definitely serve well in a live environment.

Closing out the album is ‘Time and Space’ and ‘The Troubador’. The cosmic sounding former is once more a typical example of the excellent blend of stoner/blues rock that Zed have to offer. Sweeping guitar lead lines, solid mid-tempo rhythm groove and emotionally charged vocals with a raw edge. It closes with a full band jam coming together to make a swirling wall of noise that fades out. The final track features an intro the builds on the jam like fade out of ‘Time and Space’.  As it develops, a driving groove is established but the lead guitar lines are still given space to move within the framework shifting the melody. The vocals are heavily washed in effects giving a sense of sweeping, swirling space. It’s a track where all the elements sound like confusion yet converge into a coherent delivery. In the latter part of the track, the breakdown heralds the introduction of a tempo shift and dynamic change that brings together all of the instrumentation into a heavier style and the searing guitar solo cuts through the top of the mix.

‘Volume’ represents a fun groove laden trip across ten tracks. The track listing enables the album as a whole to ebb and flow mimicking the dynamic shift within the band’s song-writing. It’s difficult to choose any particular stand-out moment as it appears that Zed are firing on all cylinders when it comes to the creation and production of this album. Without a dull moment, Volume’ will not only provide established fans will an excellent addition to the back catalogue. It will also serve as a solid gateway for new fans and those that already enjoy heavy rock ‘n’ roll. Having just completed their first European tour, ‘Volume’ provides a compelling argument for them to come back and showcase these tracks to audiences over here.