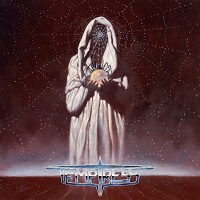 Italian based three-piece Temptress are a recently formed metal band taking heavy inspiration from 80’s era NWOBHM. For their initial release they’ve teamed up with Dying Victims Productions to present 7” ‘The Orb’. Two tracks that pull all their focus from a classic metal sound and provide a wash of nostalgia for the listener. Will the single release herald a welcome blast from the past with a modern twist or offer only the sound of a band attempting to revive a by gone style?

‘The Orb’ kicks straight in with lead guitar lines making use of the tapping/hammer on technique to create a rapid tempo intro. Immediately the listener is put in mind of bands such as Angelwitch and early Maiden. Certainly, as the spoken word vocals following the guitar work fade out and a solid galloping riff takes charge there is no mistaking the NWOBHM influences. Holding a solid mid-range tempo throughout, it’s a track that easily induces head banging and a sense of effortless metal fun.  The dynamics shift suitably between the verse and chorus sections in order to elevate the music as the listener would predict allowing for an easy free flowing nature. The vocals are given a reverb effect which creates a sense of space as they sit upon the rest of the instrumentation in the mix. The rhythm section is tight and keeps a rapid pace matching the charging guitar riffs. A straight forward but well executed introduction to the Temptress style.

‘Woman’ is the other track offered up. Much like ‘The Orb’ the influences of the band are clear to hear right from the get go. Crashing percussion matches a slick guitar lead before the track kicks in proper reviving the galloping style riffs and tight, solid rhythm section. With the vocals once more given an echo reverb wash and matched with harmonies, they clearly cut through the mix. It’s a track with a slightly more aggressive edge to its tempo yet still induces the same head banging friendly vibe. The song structure shifts between the verse/chorus sections and moves well into the breakdowns where upon it moves into a slightly different direction to create additional sonic interest. However, it never loses its way as a straight down the line classic metal track.

There is a lot to enjoy over the course of these two tracks. Temptress have faithfully recreated a NWOBHM vibe with both ‘The Orb’ and ‘Woman’. From not only the song-writing as the lyrics could fit with the back catalogue of any 80’s era metal band that one would care to name. They’ve also utilised similar instrumental techniques and playing styles that fit in a traditional metal style. With no frills and a solid command of their instruments they’ve created a good, cohesive metal sound.

What also sticks out is the production of the tracks. They’ve clearly listened heavily to the production elements of their influences and have emulated these too. Whether this is a step too far as at times the production does lead to some clarity of the music being compromised yet it shows a stoic nature to stick with tradition. It could be argued that yes early metal bands do have a raw edge to their sound because of their production values. However, the techniques available have greatly improved over the years and if what is available now was available to bands then, they probably would have used the better options. Ultimately that is probably the only negative aspect about what Temptress have offered up here.

There’s a lot of fun and enjoyment to be had on these tracks and that is what metal is all about. Hopefully, they’ll be more from the Italian power-trio in the future.