Words and pictures by Neil Henderson

A very hot Thursday afternoon found me packing my camera bag and heading to the legendary Glasgow Barrowland Ballroom the scene of the last venue I had seen the original line-up of the Fields of the Nephilim play, way back on the 27th September 1990!

Twenty-nine years later an much has changed as I approach the famous Glasgow venue: instead of basking in the band’s ‘Earth Inferno’, the only inferno is being supplied by Mother Nature herself and there is a distinct lack of cowboy-hatted, duster coated watchmen outside the venue. Consequently, getting into the venue and sorting out my pass for the evenings shooting was not a problem before heading upstairs to the famous ballroom and the scene of so many talked about and fondly remembered gigs in the past. 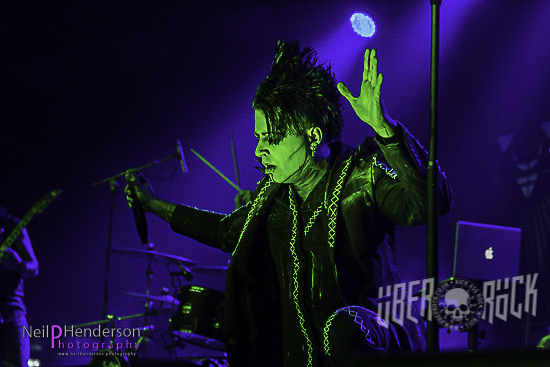 First up tonight on the bill is German based but hailing originally from Spain Nox Interna performing for the very first time in Scotland. Not daunted by the lack of a crowd they performed a tight set while I was busy doing my photography duties in the pit. I particularly liked the Dorian Grey reference as Richy Nox destroyed a painting on an easel during the third song of the set; sadly, I didn’t catch the song title. The last two songs of their set, ‘1984’ and ‘Pray’, I thought were particular good, with Richy dancing around the stage with an illuminated umbrella during ‘1984’. They seemed to go down well despite the lack of a crowd and will definitely be keeping an eye out for them in the future. 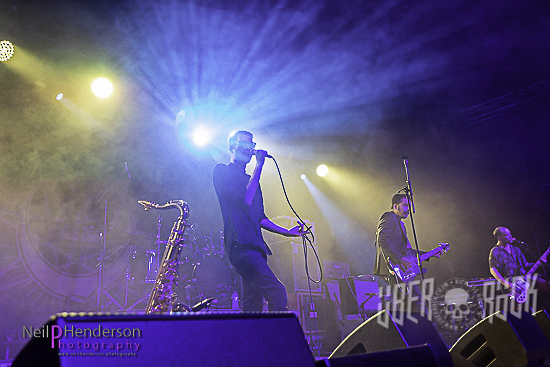 Next up were Terminal Gods, who, unlike Nox Interna, were playing their last show in Scotland as they will be disbanding shortly after a final show in London. Maybe that’s why I thought they all looked like they should be in different bands and not this one.  The music reminded me of The Sisters of Mercy but that could just have been that they used a drum machine. They were joined on stage several times by a female Saxophone who’s playing did add some nice touches to their sound an proved that they weren’t a Sister’s clone band. 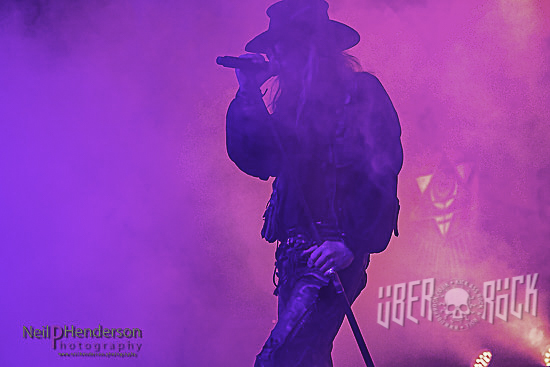 It was now time for Carl and the boys to come on stage. The opening strains of ‘Harmonica Man’ fill the air as the stage is engulfed in dry ice and shadowy figures take to the stage to play the ending of the intro track. A loud cheer erupts as Carl finally walks on stage an Gav launches into the repeated single note of ‘Preacher Man’ before attacking his guitar with his slide flourishes for the rest of the song. The sound was excellent tonight and I’m singing along as I’m doing my picture duties in the photo pit.

Exiting the photo pit during ‘Dawnrazor’’s brooding menace I join the rest of the fans enjoying the show. As I’ve said the sound was very good, and not just at the front of the ballroom, which made all the taped parts of tracks like ‘At The Gates Of Silent Memory’ all the more enjoyable, so a big thumbs up to the sound crew. Talking of ‘…Silent Memory’ it was nice to hear it and ‘For Her Light’ being played again as the bands third album, ‘Elizium’, tends to get the short straw when it comes to tracks being played from it, so getting two tracks tonight was a nice surprise. The downside to this is that something has to be dropped from the set-list and tonight it was a personal favourite of mine, ‘Psychonaut’: you win some and you lose some. 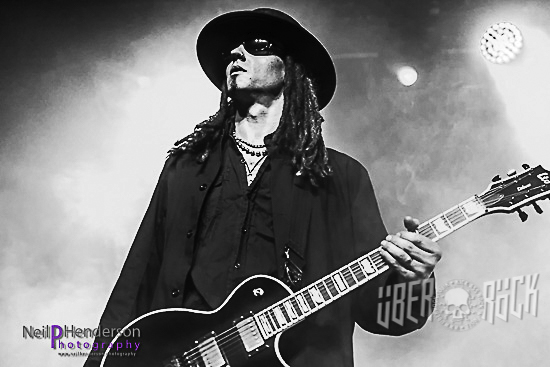 The band was in good form throughout the night though sometimes a bit hard to see thanks to an overactive smoke machine; maybe they were compensating for the last time they played Glasgow and had to play most of the set without one! On the whole, it was a great night of music, maybe slightly tempered by the crowd size; I’m sure if there had been more people and atmosphere tonight would have been a legendary concert with great sound, but I guess that’s what makes the really good gigs great when all the factors do align and you have a very special night.