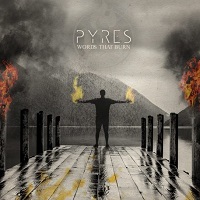 The sign of a great band is when they are able to take a number of apparently disparate influences and mould them into a clear, cohesive sound of their own. Many bands fail, because they jump from style to style, trying to be too many things different people, without giving consideration to the overall blend of the sound and creating a solid, clearly identifiable niche of their own. Words That Burn have managed to walk that fine line and, in the process, hit and album that hits hard and caresses you lovingly in equal measures.

The Dundalk quartet first came to the metal world’s attention back in 2017, when they impacted with the force of a runaway meteor with their debut album, ‘Regret is For The Dead’: the four lads obviously had no regrets about grabbing the Überverse by the balls and giving it a fucking good shaking, as the album was not only a strong marker but a defiant statement of intent from a crüe who have gone on to establish a reputation as one of the most fiercesome metal outfits to have emerged from Erin’s shores in the past half-decade or so, following in the footsteps of the likes of Dead Label in placing the island firmly on the metal map and establishing it as very much a force to be reckoned with.

As the opening drumbeat of ‘Mammon’ unfurls from the speaker, you know you’re in for a hellish ride with ‘Pyres’. The song immediately twists and turns, the initial genteel guitar developing quickly into a crushing riff while Roni MacRuairi’s vocals draw out the inherent sense of melody of which WTB never lose sight. Immediately, the aforementioned disparate influences are obvious, as the song draws on elements of melodeth, metalcore and alt-metal, but all blended together in a way which develops a highly charged atmosphere which permeates the rest of the album.

Where WTB really succeed, and where many of their contemporaries fail, is in their stunning use of aural contrasts – pummelling you one second, then easing right back before launching once more into the fray. This is clearly demonstrated on lead single ‘Arise’, which contains some beautifully deceptive combinations of light and shade, the epic groove of ‘White Smoke’, the hardcore beatdowns of ‘Deathgrip’ and ‘Shallow Sleep’, and the wonderfully atmospheric ‘Fire In The Air’.

The first half of 2019 has been an amazing one for the Irish metal, on both sides of the border, what with the stunning new albums by the north’s Ketos and Skypilot both already having been given the coveted ÜR Seal Of Approval. With ‘Pyres’, Words That Burn have joined countrymen like Two Tales Of Woe in proving, yet again, that their southern contemporaries are no slouches either when it comes to taking no prisoners. ‘Pyres’ certainly lives up to its title, as it is an incendiary album which most definitely will light a fire under the metal scene, not only on the island of Ireland but across the rest of the Überverse.