Witchcryer – ‘When Their Gods Come For You’ (Ripple Music) 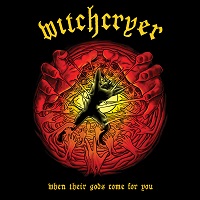 Witchcryer are a band I have both good and bad memories of – being the last band I remember covering before my father’s death, but a band I absolutely loved the music of on their debut. I still remember vividly being sat on a coach, en route to a gig, and knowing almost word for word what my review was going to be when I was halfway through the album, finding myself that enthralled I barely registered the picturesque landscapes I was being driven past, which almost always raises a smile from me. This is that awkward sophomore record though, where bands are stuck between sticking to what they already did and experimenting – to varying degrees – with their sound. Curiosity to find out what they did got the better of me, and I put it on for my first listen…

I have to admit to being very pleasantly surprised with the direction they decided to take. They have not just stuck to the very Sabbath-like riffs that pervaded their debut but incorporated something a bit more in, with the bass work from Marilyn seemingly having fused the previous bass lines with the band into some desert rock in the style of Yawning Man, adding a certain level of melody and more relaxed groove into the all-out aural assault that was almost the entirety of the first album. The way the guitar and bass harmonies both synchronize and play against each other to provide varying depth of sound at different times is genuinely interesting and attention grasping without the need to show off their undoubted talent.

In terms of the music, it very much shifts between what their debut ‘Cry Witch’ did, with plenty of Sabbath swagger, and the aforementioned Yawning Man brand of desert rock that relies on delicacy and precision as much as it does a more laid back vibe, with the two combining exceptionally well by a band who are clearly relishing their time together and making sure they can be fully proud of what they put out. Suzy’s vocals sit well with an almost scornful tone to the gravel she produces with apparent ease just working on every level and with each aspect of the instrumentalists’ performance. I keep coming back around to this only being their sophomore release, but this is more due to simply how tight and in tune with each other’s thoughts the writing seems to be than being merely stuck for words.

Adding into all of the above, there is clearly a level of conceptualism to the writing in this sophomore, with the devil, Sisyphus, Nemesis and Quetzacoatl all being prominent names in the song titles alone. Add in the title track ‘When Their Gods Come For You’ – a song that seems to be as much about standing up for what you believe in (whatever that is) lest others should try to force their beliefs on you – and you have an album that has incredible depth and songwriting, both lyrically and musically, that you would not expect from a sophomore release. This is a release that the talented four-piece can be very rightfully proud of and one that will hopefully start to bring them the accolades that their work to date deserves. Already a strong contender for my album of the year, this is desert-tinged doom rock at its absolute finest.