When it comes to high flying artists, there are few that fit the description more aptly than Seattle-based songsmith Christopher Sulka… well, he does own his own airplane and run a flying school! In between that, he’s also managed to produce 13 albums over the course of the last two decades. With his most recent, ‘Figure It Out’, currently available, we took the opportunity to catch-up with the guitarist/singer/composer to find out a bit more about what makes him tick. 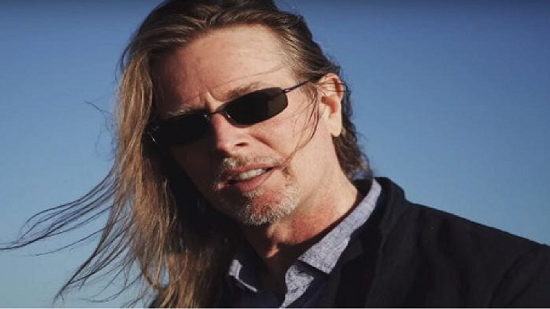 We started by asking him who else in the band to which he gives his name:

I have Anna Eppink is on bass and Michael Bedard on drums. On this latest album I played guitar and keyboards as well as doing the vocals and came up with the songs. For small venues it’s just the three of us. For the festival stages we hope to get the string and horn players that are on the album as well.

As the main creative force in the band, was it an obvious choice to use your surname as the band name?

Although Sluka is my last name, it wasn’t my idea to use it as the band name. When I got signed, the Japanese record executives insisted the band name I had, “Fear of Ordinary Life”, was too long for the international market. They liked my last name because when pronounced by the Japanese it comes out as “Suruka” which is a slang pick-up line meaning “Let’s go and have sex.” But a Sluka is actually a bird, very common in Bohemia.

So, does that reflect what you are seeking to do/achieve as an artist and a band?

Well, yes… as a pilot and someone who has had a lifelong fascination with flight I think being named after a bird of flight is very relevant and fitting. Anna is also a pilot with similar aspirations.

These days I would say it fits into progressive alt kock. The sound and songs are usually me trying to recreate what is playing incessantly in my head until I get it right.

You have just released your latest album… can you tell us a bit about it?

No… but please listen to it.

A common theme in all my music is the recognition that we are all doomed. Nevertheless, I desperately try to find glimmers of hope and evidence of our greater selves individually, and as a species with a creative civilization. With each album I explore these avenues ever more intently.

Pop culture is always changing, evolving, and growing, depending on technology improvements, personal and social preferences, and world events. Currently we’ve been gaining attention on Facebook, Instagram, YouTube and many other similar platforms. Who knows what it will be in the coming years?

Well, there is music… and then there is the music business. And in any business, there is supply and demand. As an entrepeneur you must find inventive ways of creating demand for your product… your music. It used to be that a band would go out on tour, often at great cost, to promote the sales of their music. Now it seems to have flipped. There is so much “free” music out there that musicians probably need to think of their music as a means to gain attention and interest in their brand, with the hope that people will pay for tickets to attend their shows and buy merchandise as mementos.

The pandemic of the last two years led to a lot of bands having to explore other methods of generating income marketing themselves. I’m thinking of how many bands found themselves having to go down the live streaming route. And a lot of them charged their fans for watching the shows. I know there are pros and cons to “free” versus “pay per view”, but as a young band I’d be interested to know if, given the shitfuck of the past two years, it is more important for you to get your music out there than to make money out of doing so? I guess the point I’m making is “is it worth some short-term pain for long term gain”?

I’m fortunate to have had 13 studio albums released everywhere. With such an extensive back catalogue, and after fulfilling my major label contracts after the third album, I don’t need to sell as much to create the same amount of income as when I was under contract. In fact, I do much better as an independent artist with my own label. But I am grateful to the major labels for “breaking” me to a worldwide audience.

Life does seem to be getting back to some form of normality, but do you think the option of things such as live streams will continue to be used by bands, especially to reach into territories where they may not be able to play, or afford to go to?

It really depends on the artist, what they want to do and where they are at on the ladder of success and disappointment. I personally feel there is no substitute for the magic of being at a live show. I don’t get that magic feeling from live streaming. But I recognize current technology makes it at least an option that didn’t really exist in a practical manner until a few years ago.

We are pilots and we have our own vintage Beech 18 which we can fly almost anywhere with ourselves, our crew and all our equipment. We are currently fielding offers and trying to work out the logistics of taking to the sky and performing all over the world. Stay tuned!

OK, now a bit of fun, and a couple of quickfire “out there” questions to give us a wee bit of an insight into your personality:

Final question: now that live gigs are starting to get fully up and running again, and you have your choice of any bill to be a part of, who would be the three other bands (signed or otherwise) you would choose to play with?