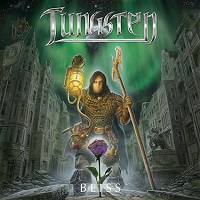 Tungsten formed in 2016 when drummer Anders Johansson (Hammerfall, Yngwie J. Malmsteen’s Rising Force, Manowar) asked his sons Nick Johansson (guitars) and Karl Johansson (bass) if they were interested in starting a brand new band with him. Tungsten’s music has become synonymous with melodies, industrial power metal, and hints of Northern Folk music. Tungsten’s first album, ‘We Will Rise’, was released in September 2019 with the track ‘The Fairies Dance’ close to passing three million streams on Spotify alone. A year later, in November 2020, Tungsten released their second album, entitled ‘Tundra’. The song ‘King of Shadows’ was chosen as the first single, and has since gone on to become an anthem for Tungsten when performing live on stage.

The quartet’s third offering, ‘Bliss’, is their heaviest and darkest album to date, with the typical ingredients that define Tungsten’s music also breaking new ground and exploring fresh territories. The hook lines are stronger and more dynamic, with lyrics taking a darker turn whilst still focusing on relatable themes. And so concludes the statement from the record company. But, what do I think of, that is the question: well, let’s find out, shall we?

‘In The Centre’ is the first track and initially, vocally, I did not think it would be my sort of stuff at all. The extreme vocals add more of a metal core feel to the proceedings, which is nice and the intro has a nod towards some industrial sounds which are also intriguing. Overall I am not convinced by the first track.

And so on to ‘Dreamers’ which has an even more Euro power metal feeling. It does have a certain folk vibe to it which does rescue it from mediocrity. It all feels very old fashioned and done to death though.

Let’s hope ‘March Along’ can redeem this album. It does, in fairness, have some decently heavy riffs and is possibly the heaviest track so far, which isn’t saying much, but it is a step in a more positive direction. If you like Luca Turelli this might be up your street, but it’s not to my taste.

.Heart of Rust. has a strong folk opening to it before descending into a fairly bog standard almost ballad feel and then reprises the folk riff. I do recognize that Tungsten are very good musicians and if you are into 80’s hard rock mixed with folk then you might appreciate this more than I do. The extreme vocals did lift it and I did feel that having this on more than the odd track might just have lifted this album to something more contemporary.

‘Come This Way’ has some dance type elements to it, which I am not sure work. It then launches into something more folksy with a slight medieval twist. I didn’t feel it provided anything new and was somewhat derivative of a lot of Euro power metal bands. I am increasingly feeling that I was the wrong person to review this, as it is the sort of rock that I personally consigned to the ’80s.

‘On The Sea’ is the next track and it feels like it is an old entry from the Eurovision song contest, and not the winning entry. Enough said.

With ‘Bliss’, as it is the title track I am really hoping for something a bit more memorable. It does start off in a more interesting way, it is far darker and the ethereal keyboard adds a welcome broodiness to it. This is by a long shot the best track so far. Why couldn’t they have done more stuff like this? It is surprisingly good and innovative. The industrial sound effects really add something that is more up to date.

‘Wonderland’ is next. It is not on a par with ‘Bliss’ but has something about it that just about manages to spice up the overall blandness of the song. With the extreme vocals feeling like an after thought, again the Eighties power metal feel is back.

Starting with a pleasant folk style feel, ‘Afraid Of The Light’ is next. It really seems dated though as it progresses into the main part of the track. Again the sparse extreme vocals seem almost just thrown into the mix rather than an integral part of the song. ‘Eye Of The Storm’ shows a certain pattern to the songs on the album as again it has the folk/Euro power metal element to it. Now I do normally like folk elements but all to often it feels like they are imitating folk metal rather than having any real understanding of it. Unfortunately it can give a bit of a Eurovision feel to the proceedings, as stated earlier.

‘Northern Lights’ is the last track and it is an epic at over six minutes, but it already feels longer as it starts in a very pedestrian way, I have to say I feel like I am ploughing through this one. As I stated earlier Tungsten are very good musicians but that does not necessarily translate into good memorable song writing. Overall it does feel like they are essentially a Euro power metal band with an affinity for ’80s style rock. They have thrown in a few more contemporary sounds, such as extreme vocals and odd industrial elements, in an attempt to make it sound more relevant. To be honest it does not hold together as an album as it is far too inconsistent. The bright side is that at least it features ‘Bliss’, which is the outstanding track of an otherwise dull piece of work.