The Über Rock Singles Club – Mayhem In May (Volume One) 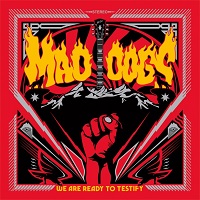 Welcome to the latest edition of the Über Rock Singles Club. We have managed to keep the Club up-and-running despite the numerous Covidications which we all have had to endure over the past 24 months, in order to bring you the hottest new sounds around. And once again we have another hitlist of superb sonic experiences to tickle your sonic senses, with a selection of my favourite tunes to have found their way on to the ÜRHQ deathdecks over the past couple of weeks… Bearing in mind that we received more than 400 submissions, it was not an easy task to whittle them down to this all-too-short playlist of just a handful musical gems…

We’re starting off in true ÜR kick-ass rock ‘n’f’n’ roll style, and we sure as hell have ‘No Regrets’ for doing so, especially when the soundtrack is a slice of punchy proto-punk so fresh out of the garage that it’s still reeking of engine oil… ladeez and germs, please put you hands together and start salivating like Mad Dogs:

Okay, I know we haven’t finished our first round of pints yet, but it’s time to take a trip to the Gymnasium, where we find guitarist and songwriter Charles Hansen promising to be our ‘Coast To Coast Companion’ as he takes us on a rollercoaster trip through a world of dashed dreams and rock ‘n roll excess, Sunset Strip style:

Next up, we’re about to Immerse ourselves in another life lesson, this time about ‘Chemical’ dis-abuse as the Bristol quartet once again deliver a serious message – this time about the unwarned and potentially damaging side effects of ant-depressants – in a way that is both catchy and energetic:

One of the fastest rising acts on ŪK punk scene undoubtedly are Bob Vylan, and the London duo are proving that they most definitely, and defiantly, are ‘Wicked & Bad’ with the latest banger, and guaranteed floor-filler on their forthcoming tour, to be lifted from their just-released second album:

Another change in mood, and location, as we head back to Los Angeles, where Motive Black certainly lifted us up with their energetic and euphoric collaboration with Butcher Babies’ frontwoman Carla Harvey, while simultaneously introducing us to their own new singer, Elana Justin – something they do in emphatic style:

Another collaboration up next, as the flamboyant Justin Hawkins has been helping out rising young LA rockers Classless Act, and once again steps up to the microphone to help out on the band’s third single, ‘Time To Bleed’, which in itself is another tasty morsel extracted from their forthcoming debut album, which will be released just in time for them to criss-cross the ÜSofA as opening act on what undoubtedly will be one of the summer’s hottest tours, with Motley Crüe and Def Leppard:

Some more serious punk action, as Belgian combo SONS literally batter their way onto the deathdecks with their combination of intense ferocity and staccato riffs, proving they most definitely are no sweet boys in process:

Another band guaranteed to light up dancefloors and moshpits alike are club regulars The Cruel Intentions – and, just to be on the safe side, they’ve brought along their own ‘Kerosene’ to make sure they do so to full effect with what should prove to be one of the feel good anthems of the summer:

You’re nothing but a ‘Mother Fucking Liar’ is the latest declaration of intent from our favourite aliens, GWAR, who once again are invading our eardrums and infecting us with their brand of aural plague with the latest sample of their new album, which will be followed by a string of UK headline dates built around their appearance at Bloodstock:

Hold on, there’s a knock at the service door… oh, look, it’s our old friend Malibu Lou, who’s always extremely welcome with his special deliveries. On this occasion, his latest treat comes from The Gypsy Moths, who are teaching us the rules of the game by the name of ‘Relievio’ with their latest psychedelic power pop-garage soul shaker:

A slice of old-school classic rock meets NWoCR next, as Matt Mitchell And The Coldhearts return to sonic action with their tale of a bloke with a ‘Razor Tongue’, which sees them teaming up brothers Bruce and Jim Dickinson, best known for their collective stint in Little Angels back in day:

Another group of regular visitors, at least since they first invaded our pages earlier this year, are Celtic punks Paddy & The Rats – and we didn’t need to be asked twice to take up their invitation to ‘Party Like A Pirate’… although that nice rum they brought along did help moisten the old dancing bones:

Time for Sunday confession now, as TV Priest return to the club with their latest slice of sultry fuzzed-out post-punk, which is probably the starkest, most melancholic song they have produced to date:

Time next to check our horoscopes… well, we are in the month of Taurus after all – and that just happens to be the title of the bullish new single from Texans All Stories End: on this evidence, this is one tale that is far from over but still has many chapters to be written:

Another band making a welcome return to both the club and these pages are Brandy And The Butcher, who are putting their ‘Lucky Foot’ forward with the title track of their ÜR-approved debut album:

From the brandy we’re back on the rum again, as Malibu Lou has been skulking in the background to bring us another slice of garage-soul, Boston-style. This time it is served up (sic) by Diablogato, who are telling us that ‘She Just Wants To Rock ‘n’ Roll’… well, actually bais, we all do, so let’s spin that shiny little disc, shall we?

Our penultimate track comes from Sweden’s Liv Sin, who, like so many other artists (and the rest of us), are working out ‘The Process’ of emerging from the darkness of the past two with a vibrant new album, and a new line-up to boot. One thing which remains unchanged is another immensely impressive vocal performance from founder and frontwoman Liv Jagrell:

And with that we’re ‘Motorbikin’ into the sunset with Swedish punk ‘n’ roll veterans The Boppers, who are amazingly celebrating their 45th anniversary this year – and doing so the only way they know how, with a brand new album which proves that they may no longer be teenagers but still possess plenty of youthful energy:

Well, that’s your fill for another session. Once again, you’ve drunk the pumps and the optics dry and exhausted our playlist… We’ll be back in two weeks’ time, fully reloaded and restocked and ready to once again bring you the best rawk ‘n’f’n roll in the Überverse. So, in the meantime all that remains for me to say is keep ‘er lit, keep ‘er between the hedges and keep on rockin’ with your favourite website \m/