Until the review of the latest release from The Raven Age, neither of us had heard of these bands, so it was an opportunity to find some new music thanks to the fine fellows at Über Rock.  ‘Conspiracy’ had a recent rave review in these very pages by David, so it was a chance for the musician in the duo (James) to ply his trade reviewing the gig.

Openers Next Stop Olympus are a five-piece band from Salisbury formed in 2017 who are every bit the metalcore genre they espouse.  Whilst there are the combination of high screams, intense guitars, tempo change for chorus in the first track, ‘Low’ the drumming was a bit simplistic with the guitars bass and drums all following each other.  The change to clean vocals for the chorus led into the guitar solo and a tempo change for the outro. 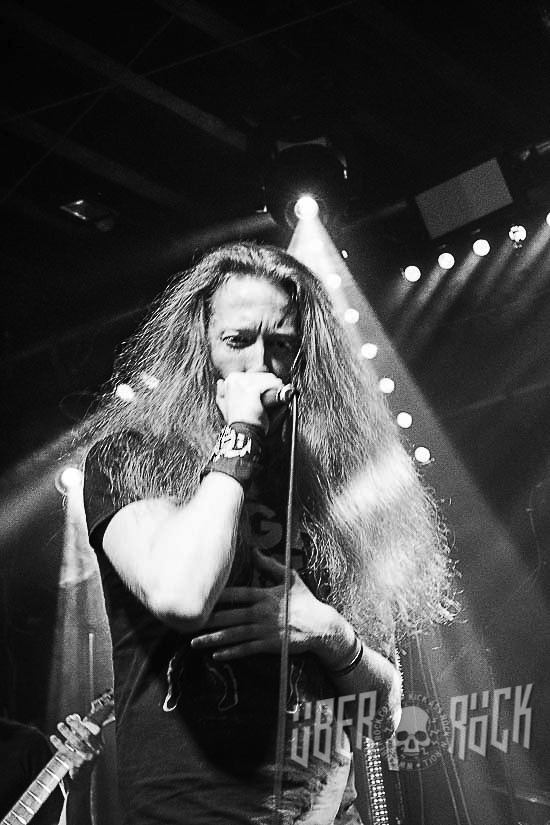 The second track, ‘Home’, started with a clean guitar intro before clean vocals led into the main body of the song with the guitar bass and drums all still following each other and some out of time palm muting.  The band began some synchronised headbanging, while Conor McInery, the singer started windmilling.  His sustained screams were impressive and the clean vocals were well backed up by the bass.

Track three, ‘Most Famous Bedtime Story’ had some tight stops between drums bass and guitar but there was some simple melodic leadwork and chugging on open notes. There was a surprising blues riff which was double timed, giving slight impact to the song. Song four was a cover of Written In The Stars’.  Guitarist Harry Ellis led some good clean singing and the guitars finally started playing different things such and there was a nice tight crochet triplet from drums in breakdown leading into a solid double kick in middle eight before solo.

‘Hell To Bear’, the current single, had some nice guitar leadwork in intro, with stabs between rhythm section and drums.  There was trading vocally between screamer and singer with the bass player contributing low screams.  As with most metalcore you would expect the drums to carry the feel of rhythm in this song and it was very energetic with some of riffs reminiscent of Killswitch Engage.  The guitars started to harmonise in this track and the lead guitarist contributed some very good clean vocals.

Overall it started OK and progressed nicely to finish with their best track. 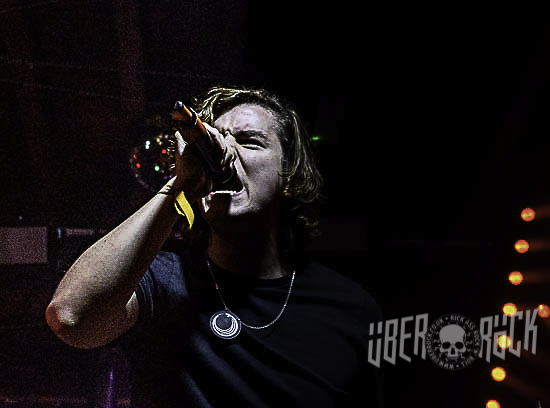 Next up, Defences are a five-piece alt-metal band from Hertfordshire who have been together since 2013.  With one EP and a few singles and an album out since then they are going on this tour with a new single out.

They start out all facing away to 808 bass synth and sample which leads into Grow from the album ‘With Might and Main’.  The bass and kick drum synced nicely together interspersed with some solid leadwork and scream and clean trading.  There was good use of sample tracks and the lighting was providing a good show.  Impressive start.

The single ‘Shatter’ was next up well lit by the strip lighting a piano intro led into the harmonies between guitar and bass and tight drum work carrying energy between sections by dropping in with stabs and snare work.  Both vocalists (an unusual combination with Cherry Duesbury leading the clean and William Alex young the screams) contributed very well and complemented each others style well too.

‘Gravity’ was a high energy song driven by hi hat and strong drum work of Kyle Park, was a definite highlight of the song. The melodic vocals sync nicely with scream style and there was solid sample work which was well timed, possibly playing to click track. ‘Might And Main’ was a very well-rehearsed performance with the sample carrying the feel, well traded between vocalists with strong screams, and a While She Sleeps-style melody carried them both. The professionalism in performance was very impressive. 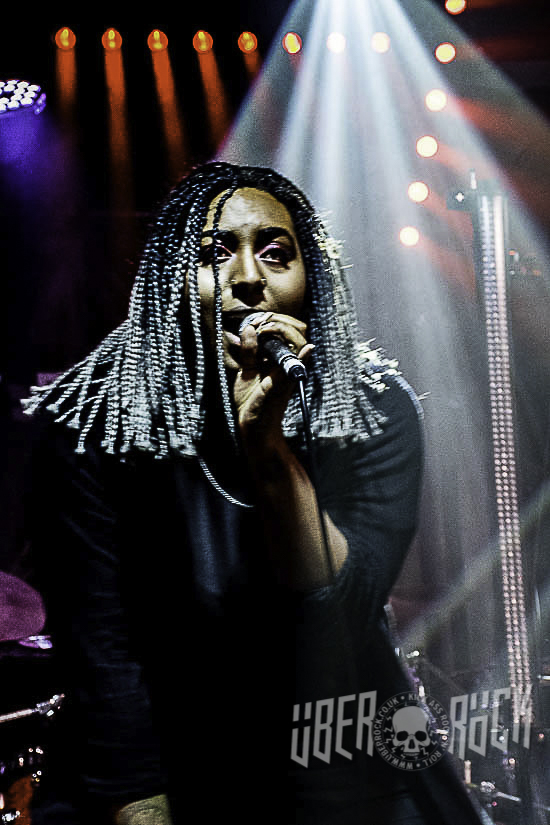 The vocalists left the stage for a rather unusual drum solo, apart from Kyle Parke on drums both Calum Wilmot (guitarist) and Ian Harrington (bassist) joined in on standalone toms, with Parke carrying the main beat and solo.  It was incredibly tight for a young band. ‘Scared’ had the vocal harmonies between Duesbury and Young and continued use of solid electronic samples.  Both singers alternated on a raised stand at the front which added to the performance.

During ‘Beneath The Surface’ the (surprisingly small) crowd was split, with one half contributing the phrase “break through” whilst the other had “stop me” to contend with in an anthemic vocal call Once again the drummer carried through sections, which flowed very well along with Wilmots’  straight quavers keeping energy flowing.  This band was the surprise of the evening as they excelled in their league.

The final track, ‘In Eclipse’, had solid leadwork with euphoric effects, shimmer reverb intro.  The kick and bass synced well with the guitar singing over the top.  The timing of the lyrics synced with kick drums stabs and held notes on bass left an open atmosphere. All this was superbly supported by the impeccable light show and incredibly well timed 808s and synced 360 between bass and guitar in outro was well choreographed. 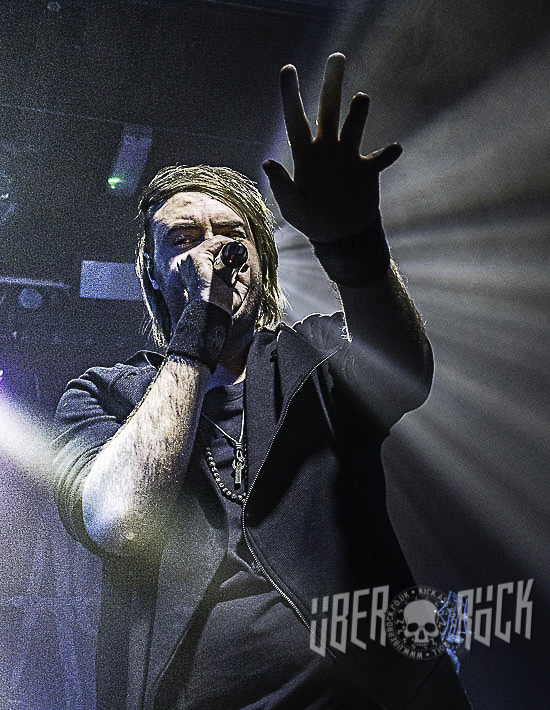 Having supported Iron Maiden on the ‘Legacy of the Beast, tour where they played in front of thousands, it must be a bit of a reality check for The Raven Age to play to an audience of 150 or so in a back-street venue in Bristol. However, the show these guys delivered was exceptional! You only get this tight and enthusiastic after doing something like the LoB tour to give you the drive and determination to achieve that recognition again.

There was an introduction with the Game of Thrones theme music before the band introduction on the album, ‘Bloom Of The Poison Seed’: an acoustic guitar duet over an orchestral arrangement and then the stabbed guitars of ‘Betrayal of the Mind’ with an intense double kick rhythm, well timed stops combined with good vocal and guitar harmonies.  A solid stop in second verse led in by complimentary guitar harmonies with one playing chords and one playing octaves.  The lead work in the breakdown was good and the strong vocals with high range and a change of feel from breakdown to last chorus.

‘Promised Land’ has a solid riff backed by consistent, driving drums of Jai Patel and a nice solo, broken up with dissonance between guitars and all sections defined by Patel on ride cymbal. ‘Forgotten World’ got the crowd participation gong with fists in air and shouts of “hey, hey” before the drop to half time for the outro; this is a very tight band. ‘Surrogate’ continued to deliver a very energetic performance, solid drumming, guitar riffs all over fretboard and good vocal harmonies with high energy verses.  All of this was complimented by the very well-played rhythm guitar of George Harris against the lead work of the very energetic Tony Maue.  The 808 synth drop was used very well and effectively before the slow, melodic solo.   The vocals of Matt James, especially with the high notes, was very impressive before the incredibly tight knit outro led into the next track.

‘The Merciful One’ continued with the strong vocal harmonies and early ‘00s metalcore guitars, reminiscent of BFMV, Killswitch and Avenged and the crowd began to get involved.  The three-part harmonies worked well and the bass of Matt Cox linking everything together with solid grounding.

‘Salem’s Fate’ kicked off with clean guitars, broken down middle eight by the high energy from other members during the solo.  The passive introduction and first chorus soon gave way to the high energy double kick drum structure that is present throughout much of the set. 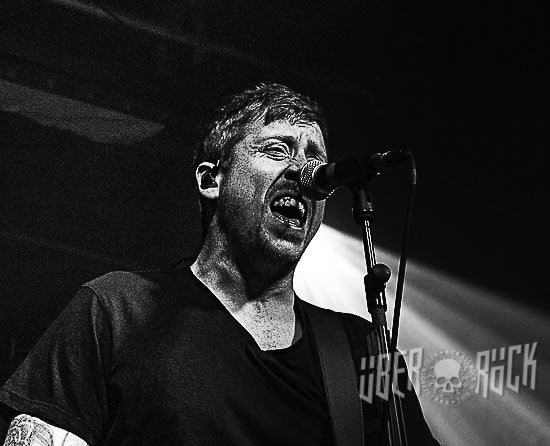 ‘Fleur de Lis’ was introduced by James as the story behind Joan of Arc with torches in the room being lit up.  The three-part harmonies and drum driven track was well carried to the breakdown, and semiquavers on guitar and toms, and stabs on kick.  The next change to china accents and constant double kick moved it onto the harmonies in the guitar solo and a very strong stop.

‘The Day The World Stood Still’ has a solid opening riff and lyrical content that carried the track along in a very Bullet-esque style with harmonised guitars and full on drums, blast beats with James vocals being a strong point.  All this combined with aggressive tom fills and anthemic choruses combined with good use of the strobe light show.

‘The Face That Launched A Thousand Ships’ opened with a synth track and clean guitars with James playing an acoustic guitar.  A clean ethereal feel to the opening chorus carried the vocals through until the rest of the band joined in.  The breakdown and outro were mainly vocally led but the solo and harmonised guitar playing was very good throughout it before the double time last chorus ended the with a tight stop. ‘Tomb Of The Unknown Soldier’ picked it up again with the drumming of Patel driving the track along before the whole thing slowed right down after the second chorus before it all ramped back up to full kilter. 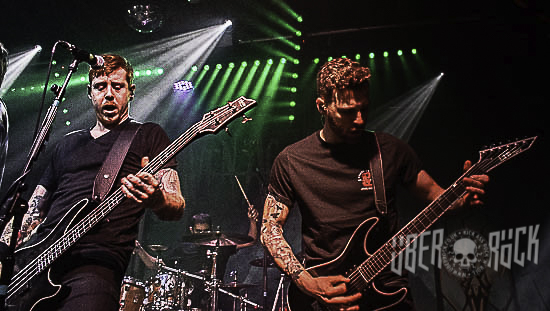 ‘Stigmata’ is another high energy track with both guitars working together and complimenting each other before it gets stepped back to a synth triggered change of pace before the dual guitar solo which is well harmonised.  Layered on this was the three parts vocal harmonies to deliver another excellent performance. ‘Grave Of The Fireflies’ started quietly before it got very energetic once again driven by the flailing arms and double kick of Patel.  Intermittently broken down by clean guitars, the light show became very intense during this track.

‘Seventh Heaven’ has another clean intro with heavy drumming and intense cymbal work and guitars flitting between chugging riffs and soaring octave work with an intense build up then drop before the airy break, and a heavy blistering solo trading between guitarists. These guys like a clean intro as this was ‘Angel In Disgrace’; again synth supported before the open ended heavy drop into the main riff, this is a very intense song.  As it was the last song, (and probably because he could get through the crowd) Tony Maue decided to go walkabout with the solo, a nice touch.

Definitely worth the trip over the bridge.  The Raven Age and Devices are worth going out to see – so just do it!  Raven Age are going to by HUUUGE.  See them while tickets are cheap, no, just see them anyway!