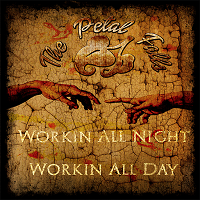 They say that creating music is a labour of love, and this certainly seems to be the case for London singer-songwriter Keith Leahy, who has spent a lifetime bringing his dream his life and getting to the stage where he has been able to release this, the first in a series of albums which apparently have spent the past two years in the post-production process and are now planned to be released over a similar timescale…

To be brutally honest, Leahy and TPF bring nothing remarkably new to the rock ‘n’ roll canon… but, then you could easily and reasonably ask who does these days? The sound is very much rooted in the late Eighties/early Nineties pop scene, with obvious influences being drawn from the likes of Simple Minds (most exemplified on the likes of ‘All Across The World’ and ‘Givin’ It Up’), INXS, Big Country and The Alarm (‘A Man In Chains’), with doses of early Springsteen (‘Colours’ and ‘I Was Amazed’) and even the likes of Marc Cohn and John Prine thrown in for good measure

Even though it most definitely not my cup of tea (I knew there was a reason I gave up the vile stuff), I am not going to say that ‘WANWAD’ is a bad album, because it is not. Far from it. It is a perfectly pleasant listen. The songs are beautifully crafted and performed. Leahy certainly knows his stuff, and you can hear the passion he has poured into fulfilling his dream of getting his music out there and heard by a wider audience. Put it this way: in a post-lockdown world, if this particular petal fell into my local pub, I wouldn’t walk out looking for better…