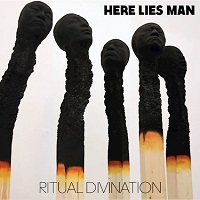 “If Black Sabbath played Afrobeat” is a description of LA doomsters HLM’s sound which the band themselves admit is “convenient and generalised” and even “a little played out”. But they equally admit that this, their fourth album, is “perhaps the best rendering of the idea so far… particularly on the Sabbath side of the equation”. Having balanced both sides of that critical algebraic problem, it is hard to argue with either dimension, as the shadow of the doom originators does indeed loom large over the aural experience of ‘Ritual…’, while the album’s creators add enough of a twist to the original sonic experiment in a way in which so many Sabbath copycats have failed to do.

It is quite possibly to my eternal shame that I am only coming across HLM via this album, coming as it does eight years into their career and which also marks a distinctive progressional step for the band, as it is the first to be recorded as a four-piece, with bassist JP Maramba and keyboardist Doug Organ (yep, seriously folks, that is his name) joining vocalist/guitarist/co-founder Marcos Garcia and his former Antibalas bandmate Geoff Mann. Despite this evolutionary move, the band have, however, stuck to their guns in one regard, as they continue to regard their albums as soundtracks to imaginary movies – and, based on the 15 songs presented here, Messrs Garcia and Mann have one vivid and weird sense of imagination, as ‘Ritual…’ lives up to its title by taking us on a dense, psychedelic and psychologically-challenging ride into the deepest recesses of its creators’ warped minds and souls.

That’s not to say that it isn’t a rewarding journey, because it most certainly is, in every sense. Huge bass riffs swirl and whirl out of the speakers and around the room, entwining you in their warm embrace while at the same time perfectly complementing the laconically precise and snappy percussive rhythms, which drive the songs forward with restrained aplomb, while occasionally exploding into a darkly vibrant life all of their own (such as on the Seventies glam meets space rock beauty of ‘What You See’), before retreating back into the furthest recesses of the studio and providing a solid backdrop to what is going on in front of them.

And what is going on in front is a rich and organic experience. Garcia apparently eschewed the use of pedals during the recording process, instead recording his guitars via four interlinked amplifiers; the result, perhaps obviously, a severe lack of the fuzziness on which so many doom bands rely, with the guitar sound almost crystal in its clarity – something which adds to the uniqueness of this particular listening experience, and contrasts in a weirdly reflective and reflexive way with the density of the underlying sound.

‘Ritual Divination’ is a challenging album. Simply because of the fact that it is both highly complex and extremely simple. There is a lot going on, but it is presented in a way which is so easy on the ear that it’s almost like having your aural cortex gently massaged with baby oil. It possesses a deceptive richness combined with a poverty, as in you feel that what sometimes has been left out is more important than what has been left in. And that is the mark of a great album and great talent.