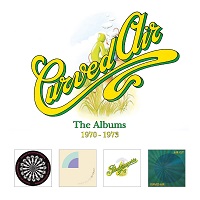 Being of a certain age gives you the opportunity for a lifetime retrospective look at artists and music that may have passed you by when you were younger-Curved Air was one of those bands.  During the period when these albums were released, I was listening to glam rock (firstly because of the availability of it on the radio) then Radio Luxembourg brought me artists like Queen, before my older brother introduced me to the Old Grey Whistle Test and the advent of prog rock; however, by that time Curved Air had already gone through their genesis (sorry couldn’t resist the pun) to exodus and so they passed me by.

Having been a bit of a prog fan, (Genesis, Pink Floyd, Yes, ELP mainly) I thought the chance to finally catch-up with them was too good to miss. Now while other reviews of these albums have already been written both from a fan’s perspective and musicality one, I thought I would give a review through the retrospectacles of life and Curved Air novice.

The four-album set goes through a wide variety of influences that are obviously aligned to the then contemporary styles and era of the late ‘60s and early ‘70s.  The classical influences and musical training of the various artists is clearly evident throughout the four albums. There are very “hippy” styles, lyrics and musical instruments used throughout the first two albums and the vocal style of Sonja Kristina is clearly derived from her time in Hair.

Much of the later prog style influenced by the likes of ELP, early Genesis and Yes is absent, probably as a result of the lack of instrument development that occurred with many of the keyboards after this time. However, the use of the other instruments is excellent.  The integration of the stringed instrument is reminiscent of Jethro Tull and without realising it I had already heard several of the tracks somewhere in my distant past despite many of them not achieve a “singles” status other than ‘It Happened Today’ and ‘Back Street Luv’.

The four albums in the set include ‘Air Conditioning’, ‘The Second Album’, ‘Phantasmagoria’ and

‘Air Cut’, with some bonus tracks and a 48-page booklet which was compiled from interviews with the various band members from the period.  It outlines the development and personality differences that can occur in the life of a band.

Whilst the tracks on these albums will be loved by the various fans of the band, I found it very difficult to sit and listen to: it was a bit like eating an elephant, which meant taking it in small chunks. This doesn’t mean that there is anything wrong, but the music and style is what it is and shows its age (much like those of us listening I’m sure) I have no doubt that fans of the band would still go to see them live and still enjoy it, and at just over £20 for the set many will buy it to replace worn out copies of dog-eared needle-scratched albums.

Given the 50-year-old recordings, however, the remixed and remastered tracks are in stunningly good quality, and each of the nuances of all the tracks are superbly demonstrated throughout, which just goes to show the level of artistry and skill that went into the original recordings and the time spent re-engineering them.

One thing I do know is that the set may be worth getting for my older brother as a Christmas present – he probably has the dog-eared originals in his collection.