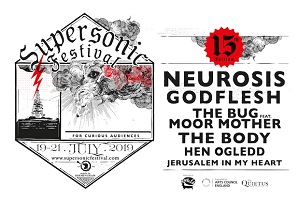 Birmingham’s premier alternative festival, Supersonic, has added another ten bands to its line-up.

These new acts join the previously announced line-up of Neurosis, Godflesh, Mono and The Body, amongst others.

Supersonic Festival is held in Birmingham from 19 to 21 July. Friday night tickets have already sold out but weekend tickets are still available.