The decades old dichotomy of Hackett or post-Hackett era Genesis has been brought sharply into focus this month, as both the reunited Collins/Banks/Rutherford Genesis and Steve Hackett are on the UK road at the same time. Whether they will be bumping into each other in a motorway service station seems doubtful though. Tonight sees ‘the prog king’ Steve Hackett hit the stage at London’s Palladium theatre for the second of a three night run in the capital as part of his ‘Seconds Out’ tour. 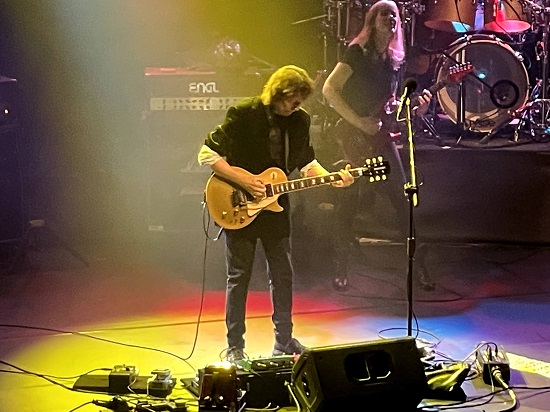 The 45-minute first part of the show sees Hackett and his incredibly talented and versatile band run through five carefully chosen selections from his solo material. ‘Clocks – The Angel Of Mons’ kicks the evening off in fine style, with ‘Every Day’, also from ‘Spectral Mornings’ equally good. ‘Held in the Shadows’, from the recent ‘Surrender Of Silence’ album, provides a truly outstanding moment from the first set. Benefitting from some great saxophone work from the particularly versatile Rob Townsend, it is a superb slice of modern-era Hackett, and instantly got me making a mental note that I need to check the album out at the very earliest opportunity. As with the darker ‘The Devil’s Cathedral’, it’s a reminder that although Hackett has traded on his Genesis heritage for some time now, he is still coming up with new material of the very highest calibre.

And talking of solo material of the highest calibre, ‘Shadow Of the Hierophant’, going all the way back to the first solo album, is as always simply breath-taking. Building from the gentle start with Amanda Lehmann’s beautiful vocal interpretation, to the intense gargantuan finale, it doesn’t get more prog than this, and a track I will never tire of seeing performed. It brings the first section of the set to a close, 45 minutes of pure prog magic, and that was just the warm up! 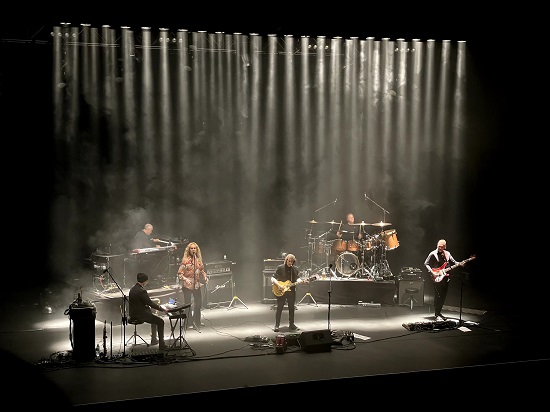 After the interval it’s time for the main event this tour is based around – the 1977 Genesis double live album ‘Seconds Out’, the album that marked the end of the Steve Hackett era of Genesis. The album is performed in sequence, and more than in its entirety, given that the stunning old chestnut ‘The Musical Box’ is restored to the full version rather than the truncated closing section on the original album. Vocalist Nad Sylvan, long established now, as ever does a fine job, this time balancing songs originally sung by both Collins and Gabriel. His voice naturally leans towards that of Peter Gabriel, which adds a good twist to the Collins songs like ‘Squonk’, ‘Dance on a Volcano’ and the beautiful ‘Afterglow’.

‘I Know What I Like’ gets a fairly radical re-working from the original version, with Rob Townsend’s saxophone exploding in an improvised middle section that bizarrely reminds me of Ian Dury & The Blockheads at one point. ‘Firth Of Fifth’, ‘Cinema Show’ and the sublime epic ‘Supper’s Ready’ provide real highlights of a stunning set that of course winds up with ‘Los Endos’, as the album does. The band are in top form, and all, especially Hackett himself, seem to be enjoying finally getting back to the stage immensely. 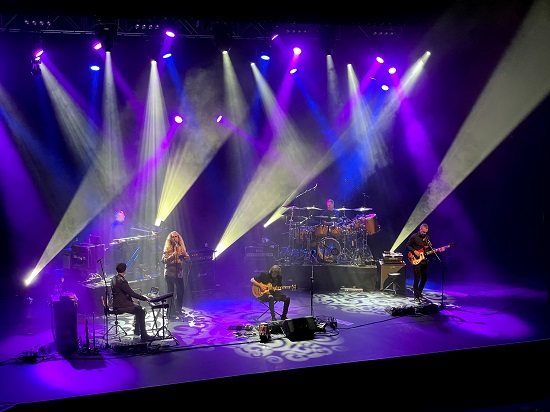 There aren’t too many members of tonight’s audience, myself very much included, who will be rushing out to pay in excess of £200 for a ticket to see a sadly ailing Phil Collins, seated and voice much depleted, fronting Genesis the pop band, knocking out the likes of ‘Invisible Touch’, ‘Tonight Tonight Tonight’, ‘Land Of Confusion’ or ‘I Can’t Dance’. It’s slightly surprising that they are including some of the vintage Genesis tracks in their set, such as ‘Firth Of Fifth’ and ‘Cinema Show’, considering they abandoned Genesis the progressive rock band a long time ago. I’m not so sure what your average Genesis punter who loves a bit of ‘Invisible Touch’ would make of that stuff anyway – probably a quick toilet/bar break. The heart and soul of Genesis the progressive rock band is here on stage at the Palladium tonight – Steve Hackett, the man who never abandoned prog, and in doing so has come to be dubbed ‘the king of prog’. Tonight he proved why. A truly outstanding show.