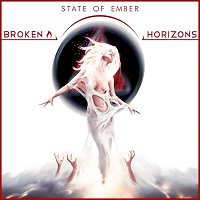 In the accompanying PR blurb, Worcester trio State Of Ember describe themselves as “taking their cue” from the likes of Alter Bridge, Shinedown and InMe.  To be honest, I can’t see any comparisons with the first two named acts, and only a few shades of the last, on this, the Midlands band’s second EP.  Which in itself is a good thing, as it means that the initial listen to this latest release – the follow up to their debut, ‘Clouded Views’, back in the Autumn of 2017 – quickly moved from asking “who do these guys sound like?” to that of “can they stand on their own two feet?”.

And the answer is definitely “yes”, as ‘Broken Horizons’ is a strong collection of songs. Nothing more and nothing less.  It’s the sort of straight ahead, no frills heavy rock that has seen such a welcome return to the British music scene in the last few years.  OK, it’s nothing spectacularly original, but then what is these days? Nothing. But what it does display is energy, genuine commitment and passion – as well as the sensibility to write good hook or three.  It also has one major plus as far as I’m personally concerned: Chelsea McCammon, in addition to being one of the growing band of impressive young female drummers invading the scene, sure rattles a mean cowbell!

Opener ‘Time And Time’ marks our cards right from the off: a big, crunching riff over a pulsing bass line and a precise, snappy percussive drive. Chris Tamburro’s voice is perfectly suited to the material, with just the right amount of gravel and gruffness to keep things at the harder end of the rock spectrum, but also with a decent range which sees him able to hit the occasional high note as and when needed.

The six tunes are well-balanced, utilizing an effective mix of light and shade to drive them forward into your aural cortex, and there is enough going on to retain your attention without cluttering up the sound or needlessly confusing the listening experience. Having said that, there are layers to the sound which reveal themselves with repeated spins – the excellent and deceptively complex bass work of Mike Landreth being a prime example.

As I said above, ‘Broken Horizons’ is may not offer anything original or unique, but it is a good solid mini-album and a definite statement of intent from a band looking to move to the next level over the course of this year. A strong calling card.