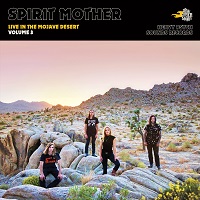 It’s a cold and wet Saturday night here in the North West of England, so DJ Astrocreep has tagged me in for a trip out to the desert (from the safety of my own home of course) to catch the third installment of the ‘Live in the Mojave Desert’ series. This week it’s the turn of Spirit Mother, who are possibly the youngest band in the series (yes, I know Stoner have only recently formed, but I’d say the experience of the members excludes them from the “young” title) which shows that these guys from Long Beach, CA are whipping up quite the sandstorm in the desert rock scene.

Like the other shows so far in this series, the whole set-up evokes memories of Pink Floyd’s iconic ‘Live at Pompeii’ show with the band performing to an apparently barren space but still putting in all the effort of a crowd-pleasing performance. However, unlike ‘Live at Pompeii’, I don’t think we’ll be getting any dogs in as guest vocalists for this one! With the stage set and the guys from Mad Alchemy Liquid Light Show all ready to weave their psychedelic magic, it’s time to get things rolling. 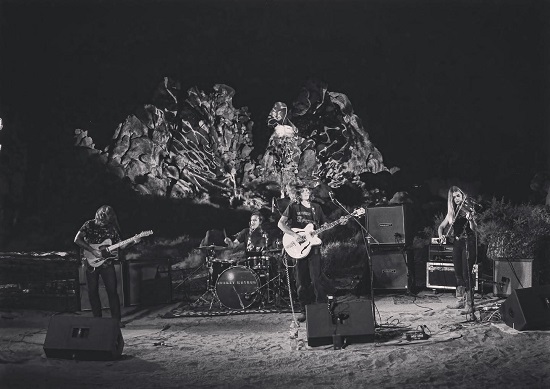 Spirit Mother ease us into the set with a slow and sexy, blues-tinged number ‘Tonic (Exodus inc.)’ which serves as a pretty effective warm up for the band and the 100+ viewers chilling out watching the stream. Things don’t stay slow for long as the band storms into ‘Ether’ which shows off the violin skills of Sarah Jane Long which adds an extra element to the stoner rock feel of the music, it’s handled really well in the mix as well which allows this to be a really prominent part of the sound.

Mad Alchemy really comes to the forefront a little later in the set with the pretty incredible light and visual effects that accompany ‘My Head is Sinking’. The song itself has a really infectious groove to it that would have got me dancing had I not been sat on the sofa, so a bit of the sofa wiggle will have to do instead! This is followed by the raucous ‘Martyrs’ with a rumbling bassline that’s bound to make the sand dance and swirl to combine with more psychedelic effects for that perfect desert/stoner rock experience!

After a brief interlude to find out the band members’ favourite live concert shows (Allman Brothers was a popular choice) the band kicks off the second half of the set with ‘Premonitions’. This is followed by ‘Dead Cells’ which comes with a bit of a twist with the lead vocal duty taken up by violinist Sarah, who assumes a surprisingly low haunting vocal style for this one. Then heading towards the back end of the set is the popular ‘Space Cadets’, the opening track from their debut full-length album, which gets everyone moving around, with vocalist/bassist Armand Lance jumping up onto the bass drum to vibe off the energy being exuded by their drummer.

The whole band has this knack of making it seem like churning out this groovy fuzzy noise is completely effortless. All of them, that is, apart from drummer Landon who absolutely plays out of his skin for the entire set, he plays with such passion that he must be absolutely sweating his bollocks out there in the desert (although it was filmed at night, so maybe it’s cool enough to stop that). Overall, the whole set is pretty tight and has been a great way to spend my Saturday night – and to top things off, like the other sets in this series, this will soon be available to be purchased on some very sexy looking vinyl, which is pretty tempting…