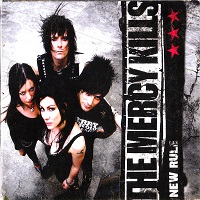 Here’s a question for you: when is a new release not a new release? Maybe when it’s actually been kicking around for a little over a decade? Well, that is exactly the case with this, the debut five-track offering from Melbourne sleazebags TMK. It was recorded ‘way back in 2010 and, while a limited number of CDs were pressed for sale at gigs, it has never been officially released – until those lovely chappies down under at one of our favourite labels, Golden Robot, found it gathering dust in an archive somewhere and decided that it at long last deserved a proper release. But, here’s the second, and perhaps more important question: has it been worth the wait?

Before we answer that, however, it is important to stress that we’re already familiar with TMK, as they have previously graced these pages, having held up the bar at the Singles Club last June and subsequently raised a middle-finger salute when they managed to gain an honourable mention in our ‘Video Of The Week’ feature. One both occasions, they were with reworkings of material from their now their extensive back catalogue, so it would seem somewhat logical that they would take a further step back in time to revisit this long-lost gem.

As you would logically expect, ‘New Rule’ is very much the sound of the band in their nascency: young, angry and determined to make a point with their brand of anarchic, energetic sleaze-infused proto-punk, delivered with youthful verve, vim and not an inconsiderable dose of “fuck you” attitude. All of the classic ingredients are here: earworm hooks tumble from the speakers like a series of tsunamis on an uprepared Asian shore, while riffs pile themselves one on top of the other with a sense of controlled chaos, all topped off with some magnificent gang vocal choruses, capturing the flavour of everyone from the Ramones to The Go-Gos, touching on the darkest underbelly of both the LA hair metal and Seattle riot grrl scenes along the way,

Several years ago, an old friend of (and former contributor to) ÜR coined the term “glunk” to neatly summarize that sound which comes about when traditional glam rock meets that of punk. ‘New Rule’, and TMK as whole, fit firmly, and proudly into that descriptive. This long-lost diamond (in the dust) truly deserves to have been polished off and brought back into the spotlight.