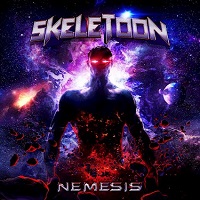 “The world needed a hero. Now, you got an unstoppable power metal one!” SkeleToon are an Italian power metal band who are known for their fun, energetic and albums that are full of different concepts. They describe themselves as a “nerd metal”, bringing in different geeky and nerdy themes throughout their albums and songs: cult classic movies, role play games, comic books and fantasy are never far away with this band.

After a short but sweet opening prelude which introduces us to this new chapter, we kick things off with ‘Brighter Than A Thousand Suns’, which just packs a punch and comes in at full force, at a hundred miles an hour. It’s definitely got a strong feel, and it comes across even more with the title of the song just giving it even more life and power. ‘Will You Save All’ is a very heroic sounding track with drums that just explode to life. You can’t help but move along and you feel a part of this story the band is taking you on with their music, ready to fight whatever badness is out in this universe they’re creating.

The title track ‘Nemesis’ starts off with slightly deeper, throaty and almost creepy sci-fi sounding vocals, going into a powerful chorus. It’s a very unique and unusual sounding song which definitely captures your attention when you’re listening. ‘Starseeker’ is one of the longer songs on the album, and definitely hits some high and fast notes. It’s definitely one of those songs that you could pinpoint exactly who sings it with their trademark style.

‘Cold The Night’ begins with a slightly slower tempo and a gorgeous piano to go along with powerful vocals. As we get into it, I feel like I should have my lighter up and swaying as I sing along – something that I would be interested to see how it would come across when being played live just because of the difference in this and the rest of the songs on the album.

‘Follow Me Home’ and ‘Wake Up The Fire’ are both tracks which are fast and feel good, and definitely have their catchy lyrics moments. I enjoyed the instruments really bringing the two to life and how they’ve continued to elevate the passion and fun within the song that makes you hooked on listening to it. ‘Il Tramonto Delle Ere’ is the only song on the album which is sung in Italian, and I originally thought it was going to be another piano lead ballad type song, but I quickly realized it was another power riff song that continued the signature fast pace. Even though Italian is the band’s native language, it did feel a little strange to suddenly be hearing them sing in it and did slightly break up the momentum they had going for me personally. It’s still a really good song, it just took me slightly by surprise, and once I got more into it and realised what was going on I really enjoyed it and the different vibe it gave to the album.

‘Arcana Opera’ starts off with some powerful chords and kicks that really get you going and excited to hear what this song has to offer. It’s the longest song on the album, coming in just over eight minutes long, but it doesn’t disappoint. Continuing with the riffs, the vocals are full of power and passion, some high notes being hit that I didn’t know were possible and most certainly impressive to hear. The song itself feels like it could be from an actual video game and including more orchestral moments in the middle confirmed that theory for me. I felt like I should be in the middle of some kind of epic build up battle, fighting off bad guys to save the day. It really was an exciting song – and my personal favourite on the album.

The title of the next song sums up just what I think of the band, and what I think they think of themselves, ‘The NerdMetal Superheroes’. It’s a fun song, with an upbeat tune that had me dancing in my seat while I was listening along. With lyrics such as ‘No one will stand in my way’, you can tell this band didn’t come here to play and certainly won’t let anything stop them from getting what they want.

The song that brings this epic nerd orchestral to a close is ‘Carry On’, and just like every song beforehand, it’s a fast pace, head bang worthy song that sums up the whole album. It’s a good song to end on because it leaves the listening on a high and wanting to hear more from them.

The whole album is a standout and keeps you on your toes and interested in what’s happening throughout the songs. Compared to their last album, which was heavily based off and around ‘The Goonies’, I couldn’t particularly pick out what each song was about other than it’s all based off of sci-fi and fantasy. It has iconic guest stars appearing throughout the songs which continue to add the different layers and elements to each part.

Lyrically, this album is the first chapter in their ‘Multiverse Superheroes’ saga – and you can feel the power the band have as you’re listening. You can definitely get this from listening that these are the characters and stories they’ve come up with while creating this concept, and just how committed they are to getting the story across. It’s fun, interesting and something that you don’t see done a whole lot, so you’re excited to see what more can be done. I really enjoyed the album and learning about them as I was listening.