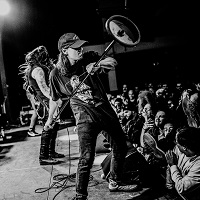 Riley Gale, vocalist with the Texas thrash metallers Power Trip, has died at the age of 34. So far, no cause of death has been given.

In a letter to fans, published on their Facebook page, the band described their frontman as “a friend, a brother, a son”. They went on to say:

“Riley was both a larger than life rock star and a humble and giving friend. He touched so many lives through his lyrics and through his huge heart. He treated everyone he met as a friend and he always took care of his friends. We will celebrate Riley’s life and never forget the great works of music, charity, and love that he left behind. You, the fans, meant so much to him, please know how special you are. If you have a memory of Riley please share it, no matter how small, as we remember him.”

Gale had fronted Power Trip since the band’s formation in Texas in 2008. Known as much for his outspoken political views as his positive relationship with his fans, he most recently contributed guest vocals to the track ‘Point The Finger’ on Body Count’s ‘Carnivore’ album.