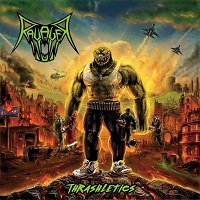 In 2017, Germany’s Ravager released their debut album, ‘Eradicate…Annihilate…Exterminate’; a solid collection of Euro-thrash tunes with a lyrical tone that leant towards the more jocular end of the spectrum.  Mad scientists, zombie hunting – let’s just say it wasn’t exactly ‘Peace Sells…’.  Nevertheless, it was a fun little outing from a promising group that suggested better things were to come in future.  With ‘Thrashletics’, the lads have largely left behind the more tongue in cheek elements of their songwriting and delivered a much more expansive and overall successful follow-up.

Opening with an instrumental track relying on classical guitar passages and harmonious leads isn’t exactly breaking new ground for a thrash album, but Ravager manage to make the gradual layering of guitar tracks of ‘Descending Dawn’ elicit an anticipation with its ominous cadences.  It’s the first of several instances of musical progression on the record, deviating from the incessant blitzkrieg that defined its predecessor.  While ‘Mindblender’ is immediately adrenalizing, the song really shines when it leans into a more Suicidal Tendencies-esque groove sections, which augment the catchiness of the riffs, and forgive the slight cheesiness of the gang vocals.

Moments like these indicate a significant level of musical development on the band’s part, whether it be the title track’s increased intensity as it drops in pace for the verses, or the way in which ‘Society of Blunted State’ tastefully utilizes the prominent, meandering bass lines to propel the melo-death style guitar harmonies.  There’s a lot more space to be found than last time, both in production technique and songwriting, that allows elements like this to fully resonate.  The almost nine minutes of ‘Slaughter of Innocents’ is the most obvious evidence of the band’s growth – the frenetic first few minutes seamlessly leading into a lengthy section that is as reminiscent of noughties’ Maiden as it is ‘Fade To Black’.  There’s a hitherto unseen confidence to Ravager here that is rather unexpected.

Unfortunately, when Ravager do stick to their tried and tested thrash formula it just isn’t as compelling.  ‘Dysphoria’ and ‘Kill For Nothing’ are in themselves decent examples of the genre, but they pale in comparison to the more adventurous highs of the album.  That said, the ode to moshing that is ‘Pit Stop…Don’t Stop In The Pit!’ is an entertaining return to the first album’s facetious tone.  While there is a definite increase in quality here, much like the debut, ‘Thrashletics’ feels like a band still navigating their identity, suggesting greater things are yet to come from Ravager.