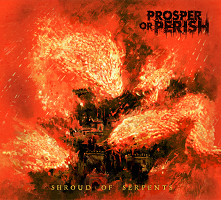 It’s been a rough few weeks, and I feel like I’ve got a bit out of touch with music which, frankly, sucks serious ass. As a result, I feel like I need to get back to my roots a bit and really ground myself in something that I can really blast out and get in the groove with. So, I’m hoping that the latest album from Prosper or Perish manages to tick those boxes – I already have a good feeling about this one so, without further ado, let’s get going!

Prosper or Perish are no strangers within the metal scene, having been around since 2007 but only having two full length albums under their belt, until now that is. Each album to date has shown an increase in their ability to bring home death/thrash influenced anthems which is exactly what I need to bring myself back around. But apparently, ‘Shroud of Serpents’ promises to bring a healthy dose of melodic death metal to this sound, and I won’t lie that it excites me even more as a result! This album has winged its way across the Atlantic from Philadelphia (where it was born and raised perhaps?) so it would only be fair to give it a good listen to…

Overall ‘Shroud of Serpents’ is packed with seriously catchy melodies full of energy that’ll make you want to crank up the volume. These are packed with serious hard-hitting drums to give just the right combination to float my boat. The vocals are harsh and raspy to offer a contrast against the melodic guitar work which some people may not be keen on, but it certainly worked for me. It feels like a throwback to the early 2000s where the likes of Trivium were starting to combine melodic metal with thrash and metalcore to form the sound that we now know and love, so it’s almost like a throwback to my misspent youth.

It’s not all heavy shit though, like all good melodic albums there’s a couple of more ballad-like trikes which soften the mood somewhat. Both ‘Parallel Reveries’ and ‘Solace and Surrender’ are great examples of the kind of soothing metal melody like those that you’d find on Insomnium’s ‘Winter’s Gate’ album. They show that Prosper or Perish have more to offer than just out and out metal, and it gives the listener a chance to appreciate the juxtaposition of these against the heavier tracks that make up the rest of the album.

If I was to pick a stand out track though, it would have to be ‘Wolves and Snakes’ which pulled me in with one hell of a catchy, and foreboding, melodic hook. This is revisited at every chorus and accompanied by a solid blast beat to really hammer it home and make this track get stuck in your head for a good while. The vocals during the verses offer zero chill as they pierce through the noise to get to the forefront of your attention. It’s a great example of that blend of metalcore and melodic death that features throughout the album, so if you want a little taster of what makes ‘Shroud of Serpents’, you can do far worse than starting with ‘Wolves and Snakes’.

All in all, ‘Shroud of Serpents’ has been a great way to reinvigorate my musical mojo. It brings together the aggression of metalcore with my favourite aspects of melodic death to give me something that I can blast out regardless of my mood. Whether you’re feeling upbeat or needing something to turn your bad mood around, I reckon ‘Shroud of Serpents’ could do just that. Something here for fans of Trivium, Dark Tranquillity, Insomnium and more. So, I think it’s fair to say that if the question was Prosper or Perish? Then ‘Shroud of Serpents’ shows that these guys will certainly prosper!