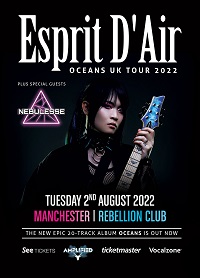 An incredibly muggy day in Manchester and I’m not even trying to recover from my weekend trip to Guildford for Radar. Instead I’m back at my usual stomping grounds of Manchester’s Rebellion for Japanese metalcore outfit, Esprit D’Air.

Bringing Nebulesse as support for this particular date, but no set times to be seen literally anywhere in the venue, it’s a bit of a mystery how long we’ve got with each act, oh well. The venue is already looking pretty packed by the time Nebulesse takes the stage and right off the bat the bass is almost silent so not sure what’s going on there. For a support act though, they’ve got a pretty solid turnout and it looks like a fair chunk of them know the band quite well.

Some song transitions are sadly a bit disjointed and not super cohesive which can be a bit jarring as the set goes on, and in parts the guitars sound either out of tune or out of time. I strongly dislike the idea of dunking on a band, especially when they’ve done well enough to get a high profile show like this but they’re not coming across well here. They’ve clearly got solid supporters in the audience, but I can’t avoid being distracted by how many mistakes are being made throughout the show, this was not a good performance for me. (EDITORIAL NOTE: It should be mentioned that Nebulesse were using a stand-in guitarist for this show).

A bit earlier than I expected (given the lack of set times anyway), Esprit D’Air start up and it’s time to get my weeaboo on! Admittedly opening with ‘Ocean’s Call’ wasn’t quite what I expected but I suppose leading with one of their biggest singles off the new album is a good shout! The bass seems a bit quiet on this performance also which is a bit of a shame, but despite that everything else is pretty bang on, including the backing synths. One thing I love about the Japanese approach to songwriting is how it just toes the line of being a bit wacky, but awesome at the same time.

Kai’s stage presence is magnetic, jumping around the stage looking bloody fabulous in that signature gown. Considering she had issues with her voice on last night’s performance, she’s putting in solid work hitting all the high notes tonight! Anything goes with Esprit D’Air: pianos, rave-like synths, strings, if it works for the song, it goes in and it goes hard. Any of these bangers could be an opening for the litany of anime I watch, each song’s got just the right amount of riffy bits and vocals that you’d expect from this sort of stuff.

It’s not all just the Kai show here though, some instrumental bits give the rest of the band some spotlight, including the drummer going batshit on a segment that’s halfway between metal and techno. We’ve even got a cover of X Japan’s ‘Kurenai’ in here which admittedly I did have to look up because it sounded so familiar! Right after that the show gets sidetracked by a discussion about what the best Sushi is. I’m totally not surprised by that mind, seems par for the course.

Bringing the set to a close with Leviathan, arguably the biggest single off their latest album, sees the evening go out with a bang; we did a two-song encore though! Admittedly it felt like a pretty short set, and we’ve finished before 10pm, which is an early one! It’s been a solid set nonetheless; I do wish the bass had been a bit stronger, but I really enjoyed Esprit D’Air’s set.

Now, if we could just get some more Japanese metalcore around these parts, that’d be bloody lovely.