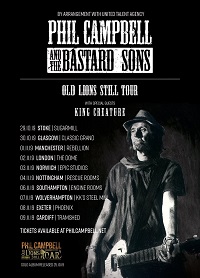 Having been away for 13 months in New Zealand, the opportunity to get stuck into some hard-hitting rock ‘n’ roll was most welcome. Not to say that the land of the Long White Cloud didn’t provide many excellent adventures and memories. It’s just that where I was located, live music was a little thin on the ground. In addition, seeing Phil Campbell keeps the Motörhead flag flying.

Opening proceedings were Cornish four-piece King Creature. They take the stage with great enthusiasm and, as the venue fills in front of them, they feed back off the crowd energy. Providing high tempo and enjoyable rock ‘n’ roll it’s easy to see how they landed the support slot. Their brand of guitar driven, crowd participation friendly music fits well with what Phil Campbell and co. produce. As mentioned, they started full of enthusiasm and the sense of fun that King Creature gave off at the beginning grew throughout their 45 minutes. Taking time to engage with the crowd who in turn joined in readily with the cues given by lead singer Dave Kellaway. As a unit, they owned the stage with the guitarists joining together for harmonised lead lines and trading places on monitors and at the front of the stage.

At doors open the King Creature merch stand was relatively empty with most people queuing at the headliners table. However, following the close of their set there was a very healthy press of people around their merch which is testament to a high-quality opening band.

A healthy buzz remained throughout the crowd following King Creature’s departure from the stage. The abundance of Motörhead shirts now filling the front rows making it clear that everyone was there to support the main man’s legacy as well as what he’s created with the Bastard Sons. Then to raucous cheers the five-piece headliners hit the stage. Kicking straight into ‘Step into the Fire’ and ‘Freak Show’, the headliners hit the mark early on and set the tone for the evening. Their brand of hard rock easily fills the venue and the audience is swept up into a jumping, head banging whirlwind. Then comes the first cover of the evening, Motörhead’s ‘Rock Out’ is well received especially by those in the aforementioned shirts. The band is firing on all cylinders as they launch into one of Mr Campbell’s latest singles, ‘These Old Boots’ which fits in with the exuberant vibe.

Only four songs in and the tone is very much set for the remainder of the evening. The band is clearly having fun with the music and thoroughly enjoys the reception from the crowd. Whenever there’s a request for participation the reply is loud and keen. They’ve clearly picked a set list that showcases themselves well both as musicians and stylistically. The handful of covers complimented the band’s original material matching the energy and style of their playing.  The covers included Motörhead’s ‘Lost Woman Blues’, ‘Born To Raise Hell’and ‘R.A.M.O.N.E.S’ which followed the Ramones cover ‘Rockaway Beach’. Every track is well received but it’s these covers that seem to draw the biggest response and they are all executed marvellously. The master stroke of including Hawkwind’s ‘Silver Machine’ and closing the encore with ‘Killed By Death’ draws possibly the biggest cheers and singalongs of the night.

Phil Campbell and the Bastard Sons injected a high-quality shot of good fun hard rock ‘n’ roll into a wet Wednesday night in Southampton. Their original numbers from both ‘Age of Absurdity’ as well as ‘Old Lions Still Roar’ were excellently paired with a solid collection of covers and certainly left the audience wanting more.