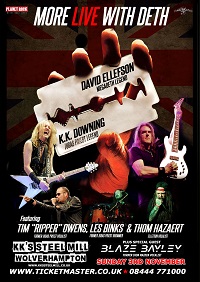 Every now and then, a gig comes along where you just look at it and make sure you get there. KK Downing plus Megadeth’s David Ellefson and a host of former Judas Priest members playing Judas Priest tracks has to rank amongst that, even before factoring in the pregig meet and greet and Blaze Bayley supporting. With the meet and greet over, we head into the venue proper, owned by KK himself, from the side lounge, to catch the live stuff.

Blaze Bayley, with predominantly his usual musical backing for him, are pretty well known for a support act. While Luke Appleton’s “guitar cum face” game is as strong as ever, the bassist mainly hides behind his flowing locks, while, despite some issues with the mic, Blaze’s vocals are as strong as ever, with a good strength to his voice that belies the 35 years he has now performed as a vocalist professionally. The band are spot on, with Luke’s guitar playing as quick and riffy as ever, while our bassist fingerpicks at his bass in a manner you would consider a cat would play with a mouse, with the audience more than playing their part singing along and cheering at the end of each song.

It’s noticeable how quickly the crowd swells in number during his set, which takes in songs from across Blaze’s career, while Blaze early describes how happy he is to be playing tonight, as “it’s 20 minutes from my house” to the amusement of those gathered, a sense of humour which sticks out as they work further into the set. It’s enjoyable, good natured a good slice of old-fashioned heavy metal, the way it should be.

So, as a main support, how can you rate David Ellefson? Well, this gig in particular says pretty damned good. The second longest serving member of Megadeth – well, no one is going to beat Dave on that score – has been around professionally for so long because of his adeptness on his chosen instrument, with this sticking out throughout his performances tonight. He has some able musicians alongside him, including Thom on vocals who does a good job of replicating Dave Mustaine but has similar issues on the mic as happened earlier, with them apparently only tuned for Tim ‘Ripper’ Owens, rather than individually which should have been done, while the band, as earlier, are exemplary in their playing.

We get a mainly Megadeth set, with three from David’s recent solo release, ‘Sleeping Giant’, in the middle, with the biggest tracks saved for our final two in ‘Symphony Of Destruction’ and ‘Peace Sells’, both of which are favourites for all of the crowd, unlike the earlier covers which were more of the know the band style of cover. A very good set, bearing in mind the vocal issues.

As supergroups go, A J Mills, of local act Hostile, might not be a household name, but he sure as hell lives up to the task of matching the legendary KK Downing, a number of other former Judas Priest members and David Ellefson that he plays alongside. While the rest of the band have their own rightful place amongst rock and metal elite, A J performs more than adequately with some rather fetching riffs in the manner that other people have performed so well. The crowd are massively up for it from the get go and the atmosphere is absolutely electric, with the cover of Fleetwood Mac’s ‘The Green Manalishi (With The Two Pronged Crown)’ the second song in the set and where it really kicks off big style.

Tim ‘Ripper’ Owens is on top form on vocals,  even when performing a couple of tracks that, by his own admittance, he hasn’t performed live before, nailing everything in succession, while KK himself is flying and pretty much note perfect with his guitar work. Our three main musicians, outside of Tim, get an early chance for a brief solo to demonstrate their talents, which KK, David and Les all perform to rightful acclaim, while favourites such as ‘Beyond The Realms Of Death’ – probably my personal favourite Judas Priest track – ‘Metal Gods’, ‘Hell Bent For Leather and ‘Living After Midnight’ are highlights of a strong and well-rehearsed main set. Tim has the crowd eating from his hand, seasoned professional that he is and which is very clear from the off, while the singing it loud enough to raise the roof, many around me exclaiming loudly at the end how they never expected to see such a lime up play in Wolverhampton.

Well, seeing and hearing is definitely the proof of the pudding here and the dual encore of ‘Take On The World’ and ‘Breaking The Law’ , with David’s vocalist Thom joining Tim on vox, are a fantastic finish to what has been a well performed gig all around, the mentioned vocal issues apart.