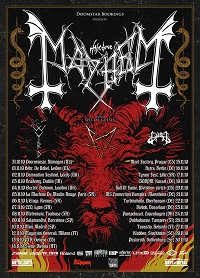 It had been a long time since I had ventured down south Dublin way (sic), but when it was announced that one of the trve kvlt bands of black metal, one of the genre’s progenitors, as well as one of its most controversial, were paying a rare visit to this corner of the Überverse, then I didn’t need a second excuse to board the express bus and head down the motorway to defile the Christian Sabbath with a bunch of like-minded heathens…

To be brutally honest, looking back I’m still not sure what to make of openers GosT. The best description I can think is EDM done death metal style, as synths parp through walls taped blastbeats and grinding live riffs, topped off by impenetrable screams which sometimes give way to almost new wave electro clarity. It’s sort of how you might imagine OMD sounding if they had crawled from the sewers of Bergen instead of the suburbs of Merseyside. It’s part techno, part black metal, part synthwave – and altogether a weird start to the evening.

It may be a Sunday evening, but Gaahl’s Wyrd bring a dark rite of a completely different kind being celebrated in other chapels across the Irish capital. It’s dark, dark and dense with the emphasis on creating an atmosphere for the celebration of the dark arts.  Gaahl himself is an imposing presence, matched in the stature department only by bassist Eld. Despite a few moments of ropiness, his vocals are rich and sonorous, with big, bassy undertones and a massive sense of the dramatic, the most subtle of his hand gestures evoking rapturous responses from the faithful gathered in front of him. It’s a masterclass of a set, benefitting from a generously extended set time, and sets the bar high for what is to come…

And that doesn’t get off to the greatest of starts, as the sound mix is absolutely atrocious: the drum sound is all snare, with no bottom end, Necrobutcher’s bass is virtually non-existent and Attila’s vocals are muddy and indistinct. It takes a couple of songs to get the sound sorted, but in the meantime the technical issues do nothing to detract from the power of the performance, which shines through – even if it is virtually impossible to see what is actually going on onstage, due to the amount of back light making the band no more than spectre-like shapes moving in the mist generated by the smoke machines. But, then black metal is all about the atmosphere as much as, if not more so than, the music itself, and they generate plenty of it.

Like his predecessor on the stage, Attila is an imposing figure as he writhes and twists in the gloom, although it is very obvious that Necrobutcher is the main player, as he leads very much from the front – even if his attempt to throw a plastic cup into the crowd results in a rare comedic moment when it bounces back off the monitor and just misses his head as it flies back towards Hellhammer’s massive kit.

Three-quarters of an hour into the set there is an interlude, which results in a change of backdrop and the band re-emerging in monk’s cowls for the second act of desecration. The fact that only a very small handful of fans notice Gaahl wandering onto the balcony speaks volumes for the hypnotic nature of what is happening on stage (even if it is still hard to see what is actually happening).There’s another break 25 minutes from the end, with the band returning in “civvies” – although Necrobutcher had already forsaken his costume and stripped to the waist – as the band conclude an intense performance which most definitely, for my part at least, has been worth the 35 year wait to catch one of the most legendary names in the field of black metal live and in the (rotting) flesh. Despite the sound issues, all five performances were exemplary, and the drama produced was fitting of Shakespearean tragedy.