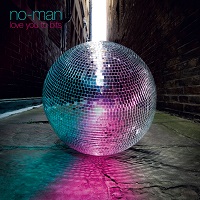 As mentioned by Tim Bowness in my interview with him earlier this year, no-man have this new release coming out which even Tim himself thought was going to surprise people. Obviously, surprises can be either good or bad and there’s always that level of nervousness the first time you listen through something you’ve already had this bit of information about for that reason. Getting it ready for the first spin, it was time to find out which way the surprise went.

As albums go, this is on the shorter side of releases – a mere 36 minutes – with two songs split into five parts each, the parts forming a continuation from each other, changing and both adding to and reimagining in different parts. You get a variety to the sound, from electronic rock to ambient to almost trance-like parts and the hook is well and truly buried in my head. In a way, I find it simultaneously different from their previous works, as Tim had said, yet at the same time almost encompassing a lot of their previous work, maybe helped by the 11-year gap between this and 2008’s ‘Schoolyard Ghosts’.

It goes more towards their synth-pop start out at times, yet there are almost elements of disco – think of Donna Summer’s seminal ‘I Feel Love’ for the kind of almost dance/trance yet disco feel that I mean – which is certainly different from their earlier work, yet some of the parts beckon back at different previous happenings from both the pop and art-rock years. The main hook itself is the big talking point, it’s ridiculously good and buries itself under your skull before you even realise what’s happening, to the point of it’s most of the way through the second playthrough before I actually realise that I have heard a bit before, such is the level of almost hypnotism you pick up from it, even when done in the different approaches they take in the parts to each song.

It is probably their most commercially approachable and yet possibly divisive release at the same time, the juxtaposition sitting mainly at their different approach to using the same hook means the idea is used over. At the same time, the different approaches feel simultaneously part of the same track and yet different with the variety used to create each yet blend seamlessly into each other. Whilst I love it from the very off, it takes several listens before I feel that I properly get it all at last, with the intricacies in the writing being so deft and unintrusive that you don’t pick up on them at first. This is a highly rewarding album that probes both at what they’ve done before, yet takes the information and heads in several directions at once. A novel and hugely pleasing concept and album.