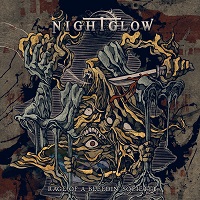 Although they trace their roots back some 21 years, this is only the third album from Italian metallians (sic) NighTgloW. Well, it did take them 15 years to release their first full-length effort, since which time their story has been the usual one of inner turmoil and line-up changes, the most recent of them saw them ditch their second guitarist and strip down to a four-piece for this new offering, which also sees them returning to the Logic II Logic, through whom they released the aforementioned debut…

Now, I’ll admit to not being familiar with the band’s previous output, but a quick search of the ever valuable interweb thingymabob reveals that ‘Rage…’ is a much more focussed and, in line with its title’ angrier affair than its predecessors. The eschewing of the second guitar has helped to concentrate their sound into something altogether more concentrated: gone are their previous progressive metal leanings, sacrificed on the altar of technical abhorrence, to be replaced by a more industrial-edged, tauter sound that takes no prisoners in the ferocity of its approach.

Yes, some of those prog elements are retained, such as on ‘On Your Own’, with its rolling, broiling riff and obvious overdubs, but the new, more aggressive approach is obvious on the likes of lead single ‘Fuck@looza’, which heavily references more nu-metal groove machines such as FFDP and KSE, although without the metalcore elements of the latter.

‘Rage..’ does have one major failing, which is off-putting right from the start. And that’s the production. Or rather lack of it. While you can hear, and feel, the band giving it their all, the mix sounds like the producer was sitting with his feet up on the desk sipping an amaretto while the band were sweating blood on the other side of the studio window. By and large, the guitars lack the necessary punch to deliver the final blow, the bass is non-existent and the drums are weaker than last night’s dishwater.  Which is a real shame, as once you strain to hear what is going on, the result is actually damn impressive, especially in both the guitar and vocal departments.

In terms of the latter, Abba is a hugely impressive singer, with a tremendous range which he uses to its full extent, from the guttural growlings of ‘X’ and ‘Fuck@looza’ through to the genteel lullaby of ‘Gone’ (I can just imagine how awesome this would sound in the hands of someone like Alessandro del Vecchio), the almost rapcore shoutiness of ‘Mofo Social Club’ back to the nu-metal vibration of ‘The Last One’, the latter of which actually benefits from the clearest, and heaviest, mix on the album, as if the producer suddenly woke from his slumber and realized he should be working instead of snoozing! In fact, if the same production values applied to the final quarter of the album had been applied to the nine tracks preceding them, then ‘Rage…’ could well have been a Championship-contending album, as it is rammed with quality songs and exemplary performances… as it is, well, I’d be sacking the man at the helm and hoping for a Solskjær-style late season run-in to salvage what otherwise has been a disappointing run of form to date.

Nevertheless, a sturdy album, if one which would benefit from a quick revisit to the studio for a touch up.

‘Rage Of A Bleedin’ Society’ is out now. You can get your copy HERE.