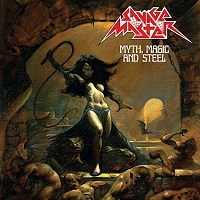 While it’s great experimenting with loads of genres and finding the new and exciting developments on the metal scene, sometimes you just need to ground yourself and get back to some distinctly old school sounds. There’s something almost universally adored in the styles of those bands who found success in the ‘70s and they arguable laid the foundations for the metal scene as it exists today. So it comes as no surprise that there are many bands who are dedicated to preserving that sound in their new releases, and the latest release from Savage Master definitely falls into this category.

Don’t let the album name fool you though. With the name ‘Myth, Magic And Steel’ you could easily be forgiven for thinking this was going to be an absolute cheese-fest of a power metal album – it’s not. Nor is it a bunch of b-sides from the Manowar discard pile to raise some extra money for a dedicated Manowar stage at UK festivals. So, let’s talk about what this album actually is then! First of all, it’s abundantly clear that the vocal talents of Stacey Savage are a clear focus, with her voice dominating each track on the album. Her voice is reminiscent of one of metal’s most prominent female stars – Doro, who springs to mind at multiple points during my first play through.

Production-wise, this is a very back to basics album, there’s no way that you could accuse Savage Master of overproduction on this album that’s for sure! This leads to a slightly raw and aged sound to the point where you could almost be convinced that you’re listening to a dusty cassette from the depths of your parent’s music collection. However, this works well with the general style of the album which will appeal to fans of ‘70s heavy metal, particularly fans of the likes of Judas Priest, Yngwie Malmsteen and Warlock. The riffs are fast, and the drums are relentless laying down the background for the occult themes to be conveyed with a smattering of doomy riffs thrown into the mix for good measure.

‘The Owl’ is a particularly strong example of the doom streak in this album with a leading rift that is unmistakably influenced by Sabbath. Stacey’s warbling vocals are just as dominant here as she conveys the dark tale of hellfire and children burning. Whereas ‘Lady of Steel’ is more representative of the speed metal feel of the majority of the album which has a shredding riff and galloping rhythm with the addition of some great backing vocals to make this track particularly stand out. I can easily see this being a strong feature of their life repertoire! (They even managed to shoehorn the band name into this one)

Overall, I did enjoy this album but it’s not one that really grabbed me by the balls. It’s certainly something to check out for that feel of the ‘70s but I can see it dropping out of my playlists fairly quickly as it doesn’t have that sticking power for me. But that doesn’t mean that this is one to avoid, in fact I recommend that anyone who lives ‘70s heavy metal give this a go as it may also more to some than others!