Korn – ‘The Nothing’ (Roadrunner Records) 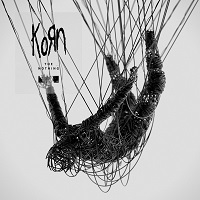 It’s rare when listening to an album for the first time that I struggle to find a standout track. “That’s the single!” leaps at me, (and in this genre, generally goes for the throat!), and becomes the go-to reference for that record. Not here. “Marvellous!” I hear you cry! “This must mean it’s fantastic from start to finish?”  Well…

The intro of bagpipes on track one ‘The End Begins’ initially gave me hope. There’s something about a piper that makes my Scottish blood tingle with anticipation, but given the pipes are basically just an intro within an intro as the song’s only 91 seconds, and a fair chunk of that is taken up with JD sobbing, it manifested into something of a let-down. Besides, come on Korn! You’ve done that already. ‘Daddy’ was a stunning piece of work, emotive to the point where it’s anguish inspiring to listen to, and even more so because of its basis built on real life events, and while I’m well aware and massively sympathetic to JD’s loss(es) preceding this album, you’re giving every cynic and his dog the chance to see it as a marketing ploy, and risk detracting from the impact of ‘Daddy’ if your audience encounters ‘The End Begins’ first.

Lyrically the album has a few moments. “God is making fun of me!” is spat out repeatedly on track five, ‘Idiosyncrasy’ and presses the right buttons.  ‘Daddy’ is again seemingly the inspiration for a verbal set of staccato proclamations on the subsequent ‘The Seduction of Indulgence’ (another track clocking in at under two minutes), and there’s an excellent repetition of “I’m.. not.. doing fine”  on track three ‘You’ll Never Find Me’ in a tone of voice that brings up pictures of Michael Douglas hitting that point in “Falling Down” where snapping isn’t just a prospect but a case of when it’s going to happen, but tracks like ‘Finally Free’ and ‘Can You Hear Me’, they feel like a watered-down Korn. It’s a bit like how orange squash is recognisable as orange based, but it’s just not something you can get your teeth into!

‘This Loss’ is the penultimate track on the album and it’s probably the most Korn-esque song to be found here, with ‘Cold’ (track two) a close second. The former is not bad, and on second third and fourth listen it’s grown on me, with JD channelling an almost Freddy Mercury vocal at one point, some decent guitar, and ending that again plucks the strings of memory and suggests what Korn were is still loitering somewhere just underneath the surface. Similarly, with ‘Cold’ I could just about see it as a song a DJ might play in a rock pub, purely for the start.

What doesn’t help ‘The Nothing’ is that I’m reminded of the album Linkin Park made, ‘Reanimation’ which I hated because they’d bastardised something that shouldn’t have been messed with! ‘H@rd3r’ both as a track name, and its initial sound, does little to repel the comparison, nor the opening of the final track ‘Surrender to Failure’. Perhaps I’ve been harsh. I was reminded of Sevendust a few times when listening to ‘The Nothing’ and I LIKE Sevendust, but that’s not what you’re buying! You’re buying a 13 track Korn album! It’s just I can’t shake the feeling that, if I can use a football metaphor, what you’re getting here is a preseason friendly version of Korn. It’s not fully fledged, and the passion I used to feel instead feels manufactured rather than real, hence the aforementioned “sobbing” cynicism  . Where Jonathan Davis’s solo album from last year ‘Black Labyrinth’ had ‘Basic Needs’ waving a “Notice Me!!” banner and several other tracks that I still go hunting when in that mood, ‘The Nothing’ just isn’t on that level. There’s nothing new here, and yet, there’s not much old here either. Which is a shame, on both counts.