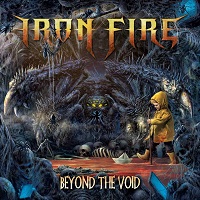 Regarded as “Denmark’s best-selling power metal band”, Iron Fire could be construed as something of an anomaly within the genre, as they are actually would could best be described as a “power trio”, with bassist/vocalist Martin Steene and guitarist Kirk Backarach (no relation to Burt, we assume?) rejoined by original drummer Gunnar Olsen for this, their ninth studio album in their 19-year career, having first launched themselves into the metal Überverse in the midst of the ‘Thunderstorm’ (now apparently regarded as something of a cult classic, especially in their homeland) back at the turn of the millennium.

To be brutally honest, ‘Beyond The Void’ brings nothing new to the power metal genre, unless you count the fact that it veers a lot closer to speed and thrash than many of their counterparts (as additionally highlighted in the fact that, unlike many of the epic takes of power metal purists, not one of the 12 songs breaks the five-minute mark). It contains all the characteristic ingredients: songs played at a thousand miles an hour, solos featuring a bazillion notes per second and song titles such as ‘Cold Chains Of The North’, ‘Judgement Day’, ‘To Hell And Back’ and ‘The Devil’s Path’.  Yeah, you get the picture, don’t you?

Having said that, it doesn’t mean it’s a bad album. As it’s not. Indeed, it contains plenty of good moments, especially in the potentially neck-stretching department: the title track kicks things off in the sort of fast and furious style that would have Vin Diesel flooring his nitro-fuelled accelerator, while the aforementioned ‘Cold Chains Of The North’ is a fists-in-the-air anthem and follow-up ‘Wrong Turn’ should be more than capable of opening up quite a few pits in the live arena. ‘Bones And Gasoline’ sees them twist the knife in the direction of sort of down ‘n’ dirty stoner-infused hard rock that wouldn’t sound out of place on, say, the new Jesus Chrüsler Supercar offering, while ‘To Hell And Back’ packs as much punch as Conor McGregor in a berserker fury.

As you might of gathered from some of the comments above, to describe ‘Beyond The Void’ as a pure power metal album is something of a misnomer. Yes, it’s metal. And, yes, it’s powerful. But, that’s where the majority of comparisons with that particular sub-genre end. Yes, it has its moments, but by and large this is a decent hard rock/heavy metal album delivered with a combination of experience, aplomb and not a little splash of panache.