King Hobo, the new project from Clutch drummer Jean-Paul Gaster, have announced that their debut album, ‘Mauga’, will be released on 31 May, via Weathermaker Music.

The King Hobo line-up is completed by Thomas Juneor Andersson (Kamchatka) on vocals, guitars, and percussion, and Per Wiberg (Kamchatka/Spiritual Beggars/Candlemass/ex-Opeth) on vocals, bass, and keyboards. 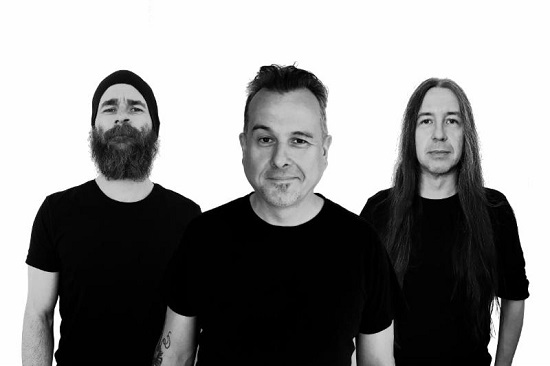 Jean-Paul Gaster told us about the background to the project:

“Per and I met in 2003 when Spiritual Beggars and Clutch were touring Europe together. Within the first hour of meeting him, he and I had an in-depth conversation about the blues and funk and how the Bad Brains were one of the most important bands of all time. Even though we grew up in countries thousands of miles apart we had an immediate kinship through our love of the music.

“In the summer 2005, Clutch and Opeth were on the Sounds of the Underground tour. Per was playing with Opeth at the time. After the show he and I would often hang out enjoying a cold beer and listening to everything from Captain Beyond to Black Uhuru and Miles Davis. On a hot and humid evening somewhere in the mid-west one of these listening sessions led to us setting up gear in the bus parking lot and holding an open jam in what we called the funk tent. These jams are where the King Hobo seeds were planted.

“It was at one of the Sounds of the Underground tour dates that Per played me a new release by a Swedish band called Kamchatka. I was blown away by the man playing guitar! He had a soulful voice and played like Stevie Ray Vaughn. This was my introduction to the powerhouse singer and guitarist Thomas Andersson.”

“In a metaphorical way this is the sound of two continents meeting; Europe, particularly Sweden, and the United States and here particularly the East coast. When we play, all hell breaks loose. Our music can, at times, be intense and loud, and then again almost like a whisper. Per and JP are my role models, as people and musicians and it’s a huge honour to play with them. We play what we feel and that’s the sound of this album. We are three musicians from different parts of the world, friends actually, who are having a musical conversation, as grownups do.”

Per Wiberg (who himself will be releasing a solo album, ‘Head Without Eyes’, in the near future) also gave an insight into the recording of ‘Mauga’:

“We recorded this album the same way as the first, live in the rehearsal room. It’s quite a liberating process compared to how a lot of albums are recorded these days. We set up our gear in a circle and go full on, no headphones or screens to seal off the amps or drums. We jam all through the day to see what we come up with, arrange it on the spot and record.  I really like the fact that it doesn’t feel like a regular recording situation with monitors, click tracks, and what not. It feels a lot more exclusive and kinda like a proper gig actually, plus we don’t have to worry what it’s gonna sound like live either, cause this is live in the raw!

“The hang out part and easy-going vibe adds a lot to how we play together as well and none of this would happen if we didn’t have a guy we trusted in the studio. Toby Strandvik did a tremendous job this time with the technical side of things as this way of recording might not be an engineers’ wet dream so to speak.

“The journey has just as much worth as the destination to us and I think we found the ‘Hobo way of capturing the moment.”