Inglorious – ‘We Will Ride’ (Frontiers Music) 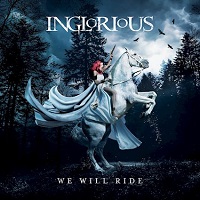 The one thing everyone knows about Inglorious is the huge personality, voice and range of Nathan James.  That was always guaranteed and is still indeed the case.  However, it is very nice to read in the press release that there is space in the composition for the other musicians in the band. Recorded during a global pandemic, it was obviously going to be a challenge – but it is one that the band have risen to well.

The opening riff and ongoing intro to ‘She Won’t Let You Go’ drives straight into the powerhouse vocals of James. However, the guitars of Danny De La Cruz and Dan Stevens, bass of Vinnie Colla and drums of Phil Beaver are not lost in the mix, nor overpowered by James’ vocals.  I am sure this is as a result of the talents of Ramesh Dodangoda, who produced it.  Damn these guys are good. This rattled straight into a classic rock opening riff on latest single ‘Messiah’ with the continual excellent musicianship continuing to support (and in some places superimpose itself) on the vocal of James.  This is another corker of a track.

A more bluesy distorted guitar opens ‘Medusa’ and carries it throughout. This is a bit softer on the vocals but no lesser quality.  The breakdown gives the option to demonstrate the guitar playing with a nice riff before the final chorus. A softer instrumental and vocal opening demonstrates the softer edge to James’ vocals in the opening of ‘Eye Of The Storm’ and a bit of a reflective element to the lyrics that could be the format of an apology from James for his previous indiscretions maybe.

‘Cruel Intentions’ opens with an acoustic guitar before whipping the track into a frenzy of bass/drums guitar driving the track underneath the vocal and another great guitar riff before the final chorus and outro. Bass-driven, low end guitar opens ‘My Misery’ which lyrically sounds like a plea for help, but its another good rock track.

Another good rock opening to ‘Do You Like It’ sounds like a thumbing of the nose to those who may have criticised past actions, but nonetheless it’s another cracking track. ‘He Will Provide’ has a another great opening but this is surpassed by the breakdown guitar/drums/bass section which really demonstrates the musicianship of the new band members: this could be a breathless section for solos in a live performance.

‘We Will Meet Again’ is probably my least favourite track on the album; although it’s not bad at all, there is nothing standout in comparison to the ones that have come before. ‘God of War’ opens with guitar/drums and then the rhythm section carries the track underneath James’ vocals, which go back and forth from powerhouse to gentle singing throughout and some nice shimverb ethereal guitar just before the crescendo. Finally, the title track, ‘We Will Ride’, opens strongly before changing tack into the vocals and some more shimverb guitar and the rise and fall of the rest of the track before the breakdown and outro: another great track.

Altogether, given the band’s history and the difficulties of the recording process, this is comparable to ‘Inglorious II’ in parts – and better in others.  The band performances are obvious throughout the album and makes the band more about the band rather than just the personality and vocal of Nathan James. From the ashes has risen a band and identity that I hope will persevere.  This is going to end up on my Spotify playlist and has probably been one of the better albums in its entirety so far this year (OK, it’s only February, but….)