Four bands, each with a decent set length, playing some heavy, heavy shit is quite the contrast from my previous acoustic-based gig with Mark Morton but just as welcome. After catching Richie Cavalera for a chat about the band’s schedule, music videos empowering women and risking their lives driving to a gig through a blizzard in the mountains, a brief wait ensued before the bands got underway in the latest of Tapestry Promotions shows. 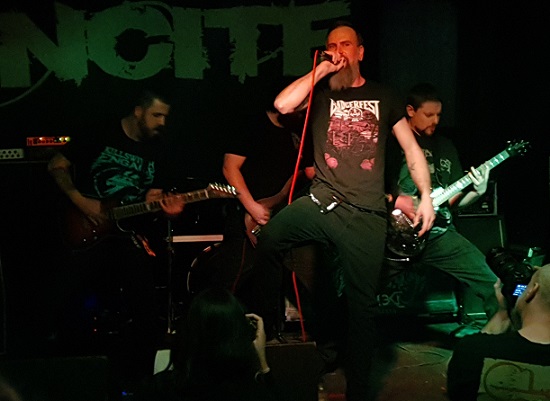 First on are Merseyside’s Deified, making the short jaunt, like myself, across to Manchester to get the metal roaring from the off. Their set takes from both their older material as well as their new EP and the urge to butt the floor with some serious headbanging is there from the start. They play some seriously cool groove metal, with Jamie’s vocals working well alongside a twin guitar attack and Tom and Jordan on bass and drums respectively. The set is coherent, well-rehearsed and shows off a good range of ability from the musicians and vocals to get the crowd starting to gee up, despite the slow start with the crowd numbers. Those gathering early have had a treat, as the Scouse metallers serve up a generous helping of whiplash – job done! 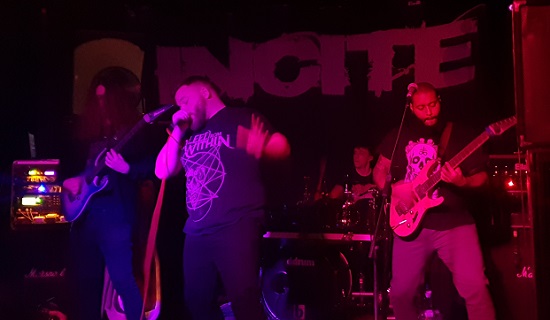 London-based five-piece Death Remains take over the mantle from Deified of aggravating the crowd with some aggressive, snarling metal, despite the lead vocals occasionally getting lost in the mix, through no fault of the band. They’re on form and take on the challenge set down before them, as they add in something a touch heavier still, determined to break our necks either through headbanging or with the sheer vibrations emanating forth from the speakers due to their songs. It’s pleasing to see that the crowd is both picking up a touch in terms of numbers and energy, as we get a mosh pit or two towards the end of the set as well as some good applause throughout the set. It’s a well-played set, full of hard riffing, raising the bar and certainly asking questions of the two acts yet to follow. 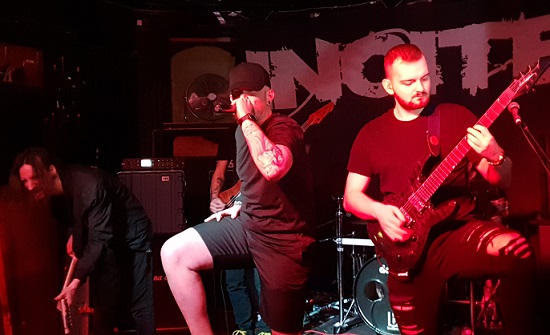 Our main support for the evening are UK metalcore mob Sworn Amongst, who add in a mix of clean and rougher vocals to compare and contrast, an approach that works pretty well when factoring in the PA system and/or sound guy dropping the lead vocals level a couple of songs into it, leaving them mired in the mix somewhat at times. The approach is more in keeping for the likes of Killswitch Engage and other such luminaries and while they do a more than adequate job of getting the room going more and in the performance of their tracks, it almost feels slightly odd that even the hint of groove to their sound isn’t really there, not in keeping with the other acts. We all seem to enjoy their set either way and they garner a good reception, both in terms of energy coming back from the crowd and in applause. It’s well performed and way more than adequate as a main support act – job once more done! 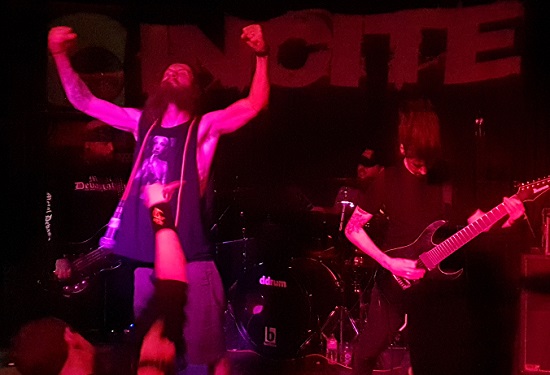 Richie and company cannot be subdued any longer though and they come on determined to not just raise the bar, but to chuck it a mile down the road at the same time. Richie isn’t so much like a man possessed as a a demon possessed by a man possessed, never stopping from rocking the fuck out and antagonising and urging the crowd on to both party and to join him at the front of the stage. The one-man atmosphere machine never stops moving, even jumping from the amps at the back quite early on, with the rest of the band clearly enjoying themselves as much as Richie, whilst keeping to their parts impeccably throughout. We get a guitarist swap about halfway through, fine with the absolute minimum of fuss, while the mosh pit slowly dwindles as the gig progresses, due mainly to a slight over run and people taking their leave a touch early for transport home. 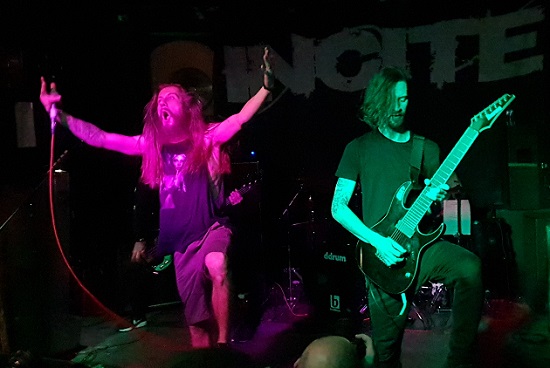 The setlist leans heavily towards last year’s release ‘Built To Destroy’, with five of the just over ten songs taken from it, though this doesn’t seem to impact negatively on the gathering around me in the slightest. The title track itself kicks off the set for real, with album opener ‘Ruthless Ways’ following immediately after, with the mosh pit warming up nicely already. ‘Losing Grip’ and ‘What The Fuck’ appear around halfway through the set, sparking the embers of the pit back up briefly, while the energy is still there overall, as those less inclined/too big (I’m close to half a foot or more taller than most people in the venue) concentrate their energy on headbanging like 0ur lives depend on it to add in to the cheers and applause as signs of our appreciation of Richie and co performing so well. It’s a great evening of music overall, to the point of a slight mis-quote of Richie comes to mind – these bands play some serious fucking heavy metal.