Immerse – ‘The Weight That Holds Me Here’ (Self-Released) 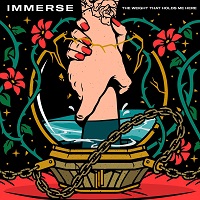 To be honest, it’s not hard for bands to slip under the radar of sites such as ourselves, given the sheer volume of emails touting “the new sound of…/as approved by…” wannabes, all clamouring for our attention and precious few hundred words to be shared with our thousands of adoring and discerning readers (that’s you lot out there, in case you’re wondering). More often than not, such submissions disappear off into the ether from whence they came, never to darken our inboxes again. But, sometimes, you get a chance to make amends for an initial oversight, especially when a particularly passionate PR type goes over and above the call of duty and embraces you with their own genuine belief in the talent which they are pushing in your direction… which is how we first encountered Bristol melodic/post-hardcore propenents Immerse.

As we mentioned in last month’s ‘Über Rock Introduces…’ feature on the young quartet, their debut album was one of the thousands that pass us by each and every rock ‘n’ roll year, but the persistence of their extremely dedicated press agent led me to check out this, their second album, released this past weekend. And it is proof that both belief and persistence, combined in equal measure, can indeed pay off, as ‘The Weight…’ is a highly confident, impressive and (and I hate to use this pun, but feck it I will) immersive auditory experience, showcasing an up-and-coming group of musicians unafraid to not only explore but redefine the boundaries of a sub-genre into which many will so easily pigeonhole them.

This defiance of genre boundaries is immediately obvious on the chugging, sub-thrash riff of opener ‘Vile’, which in turn touches straight into a Korn-meets-Slipknot nu-metal vibe, accentuated and underwired by archetypal, but highly effective, post-hardcore dominant atmospherics: it’s a distinctive and declarative marker for the various detours along which this particular roadmap will take us over the remaining ten tracks.

‘Burn’ and lead single ‘With You’ take us down what could be perceived to be a much more recognizable metalcore route, with their combination of screamed vocals and winding, harmonic guitar – the latter an impressive feat in itself, as they have just the one guitarist, so it will be interesting to see how they reproduce some of this material live when they’re eventually given the green light to do so.

The dexterity and diversity of the band’s sound is once again surprisingly demonstrated for one brief moment as the album enters its final third: on the opening section of ‘Lights’, for a few minutes you can’t help getting the feeling that Archie’s vocals wouldn’t sound overly out of place on any of REO Speedwagon’s radio-friendly hits from days of yore. “I’m not afraid to love you/just that I can’t love you enough”: it’s a surprisingly mature piece of retrospection, demonstrative of the twists and turns these extremely talented youngsters take within what could otherwise be limiting generic confines.

As mentioned above, ‘The Weight…’ is a highly impressive album. A defiant declaration of intent from an accomplished and confident young band, who most definitely are more than able to deliver their vision and plough their own path on their own terms.