Suzi Quatro – ‘The Devil In Me’ (Steamhammer/SPV) 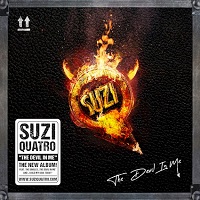 OK, you lot down the back. Put your hands in the air. How many ÜR readers of a certain generation spent at least part of their pubescence doing the five-finger rag to the sight of Suzi Quatro in her skintight leather catsuits gyrating and jiving as she invited us to ‘Can The Can’ before taking us on that heady trip down ‘Devil Gate Drive’? Yeah, I thought so: I can see the guilty looks all the way from the mancave here at ÜRHQ… your mamma didn’t like her, but we all sure as hell did… Well, the good news is that, almost five decades later and with the lady herself approaching her 71st birthday, she shows no sign of changing her tune and stopping us reaching, if a little less nervously and self-consciously, for our nether regions in celebration…

Recorded after finding herself, like so many other artists, forced off the road on which she has spent a large part of her life, ‘The Devil In Me’ was written and recorded, in collaboration with her son, Richard, during lockdown – and it is for this reason that it could be argued that the result is a reflective and retrospective album, a summation of her 57-year long career, touching on all the bases that she herself has visited throughout that period.

There are classic Quatro romper-stompers, from the declarative opening title track through the Seventies-infused glimmer and shimmer of ‘Hey Queenie’ and the fist-pumping gospel-infused swing of ‘Get Outta Jail’ (on which she defiantly declares that she needs “one more thing to satisfy, one more thing before I die”), the punky Riot Grrl-tinged gnarliness of ‘I Sold My Soul Today’ to the final ride into the sunset with the ‘Motor City Riders’ (a reference, of course, to her Detroit roots).

There are plenty of other affectionate references to the early part of Miss Q’s musical career in the late Sixties and early Seventies, from the organ swirls of ‘Betty Who?’ and ‘You Can’t Dream It’, both of which introduce that catchy itchy-foot feeling that all good rock ‘n’roll belters deliver, to the late-night bar-room r’n’bluesiness of ‘Isolation Blues’ (funnily enough) and torch song lament of the duopoly of ‘Love’s Gone Bad’ and ‘In The Dark’ There’s also Eighties-style schmaltziness in the form of last year’s surprise Christmas hit ‘My Heart And Soul’ (included here in all its full five-plus minute cheesiness) and a reference to her own dabbling in the world of musical theatre, as when she asks ‘Do Ya Dance’ (and, indeed, the aforementioned ‘Isolation Blues’), which could quite easily be the highlight of any West End production.

The album was co-written, and produced by, her son Richard (the second time he has collaborated so closely with his mom), with the aim of it both having a natural flow, and the listener being able to dip in and out of it as they please and still be satisfied with what they hear. In that regard, they have most certainly succeeded, and in the process proved that it is still possible to produce an album on which every track could well be a massive hit in its own right, but at the same time remain honest and true to the ethos and passion of its creators.

Miss Quatro has a personal mantra that “I won’t retire before I turn around, shake my ass and there’s silence”. One the evidence of the cheers of approval that this album has generated, I have a funny feeling that the original queen of rock is not quite ready to stop shakin’ her ass or creatin’ a rock ‘n’ roll noise anytime soon. I think there is a lot more gas left in this Detroit gal’s tank, and she’s gonna keep on ridin’ ‘til it runs dry… And I for one am signed up for that ride…