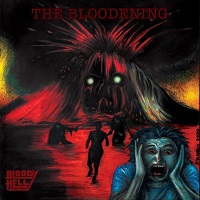 Formed in 2000, four-piece Bloody Hell hail from Finland and have made a name for themselves in and around their home country. Despite having been around for some time, ‘The Bloodening’ represents only their second full length album. While their recording output could not be considered prolific, their numerous live shows have helped cement them as a hard hitting, party band with a strong fan base. Despite the career gaps, and the fact that they’ve all got slightly older from when they started, they’re set to introduce their version of heavy metal, have fun and raise some eyebrows at the same time.

We’re introduced to ‘The Bloodening’ with ‘Hangover Rider’, a very ‘Stairway…’ like acoustic guitar intro featuring a clean descending chord progression. It seems a little unassuming considering the album artwork. However, the calm, chiming chords gives way to a pummelling drum groove that heralds the arrival of the band proper delivering a torrent of riffs, rapid basslines and high register vocals. This head down charge is much more in keeping with what Bloody Hell is about. With headbanger friendly time changes, and furious guitar work it’s a strong introduction for what is to come.

‘Face in Hell’ has a stomping march provided by the rhythm section that sets the groove for the song. It builds on this with chopped guitar riffs combined with call and response vocals. A catchy hook that pulls you in and again is very head banger friendly. What is becoming apparent as the music progresses, is that Bloody Hell are very comfortable displaying their musical inspirations. There’s the Zeppelin bit previously mentioned, but there’s also not so subtle nods to the likes of Motorhead, with the riffs and tempo deliveries in the opening tracks. Saxon straight forward rhythms and Biff Byford like vocal deliveries throughout but especially apparent on ‘The Undertaker’ and ‘Midnight Man’. There are hints of Budgie with ‘In the Night We Burn’. All the while, you could take your pick from any NWOBHM band and overlay their influence with the guitar harmonies and galloping riffs employed.

While this could be seen as a negative in terms of originality, the 12 tracks that make up the album are all very distinctively linked to the one sound that Bloody Hell have created for themselves. It’s highly enjoyable and while it’s not overly complex, the musicianship and song-writing have generated tracks that sound both unique yet packed with heavy metal markers that an audience can latch onto. One of the things that ties everything together is the lyrical content. Now I’m a simple man, I love it when metal bands have a sense of humour and are not afraid to show it. Bloody Hell deliver up lyrics with tongue so firmly in cheek that it’s a marvel they can get the words out. You cannot help but sing along to the lines of ‘The Undertaker’ without a gurt grin on your face. When the lyrics then fall into an AC/DC like breakdown chant of repeated ‘Undertaker’ you get the sense that a live audience with be having a great time to this.

Bloody Hell have struck a solid formula for the creation and delivery of their brand of heavy metal. Keeping it simple in terms of sonic display and lyrical content. Incorporating themes and techniques of their influences while ensuring their own stamp is prominent. While it breaks no new ground in terms of technicality or originality it does put a massive grin on your face. When all is said and done, isn’t that the point of metal.