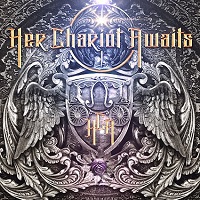 Her Chariot Awaits is another of those collaborative projects in which the Italian (mostly) melodic rock label Frontiers specializes – drawing together different artists, sometimes from seemingly disparate backgrounds, with the objective of (hopefully) producing sweet rock ‘n’ roll music together. This latest project pairs the Spanish singer Ailyn, formerly of symphonic rockers Sirenia, and the guitarist Mike Orlando, best known for his work with the on-off amalgam by the name of Adrenaline Mob.

This self-titled offering immediately throws any preconceptions about what to expect straight out the window. Looking for bombastic symphonics and sweeping operatic overkill? Forget it? Or progressive, highly technical metallic meanderings? Again, go look under a different cushion. Opener ‘Misery’ hits straight between the eyes like a runaway rock ‘n’ roll train: a dirty, thrashy, trashy slice of adrenalized, accelerated pop punk that comes across like Paramore on speed, while ‘Dead & Gone’ snaps and snarls around an anaconda of a riff that twists and turns with furious intent, while Ailyn’s vocal is delivered with a deceptive innocence that hints at the darkness that the riff propels into your aural cortex.

‘Her Chariot Awaits’ is filled with curveballs: just as you think you know what to expect, one comes at you from totally left of the field: Courtney Love would be proud to have penned something like ‘Screaming Misfire’, while ‘Stolen Heart’ sounds like a more commercially-minded Marilyn Manson, albeit with female vocals – and then we have a cover of k.d. lang’s ‘Constant Craving’ that does what all good covers should do and lends a totally different interpretation to the song, giving it a gothic vibe which actually works in a way which makes you almost forget what the original sounded like.

‘Say No’ is another massive slice of heavy power punk, which sort of, weirdly, reminds me of Hands Off Gretel: in fact, if you want a ready reference point, you could do a lot worse than consider what Ms Tate might sound like with old-school screaming metal guitars behind her. But, then, they go and change the mood again, with the industrial DM-edged acidity of ‘Turning The Page’, by far the album’s heaviest and most expectedly “traditional” track, before veering in the approximate direction of power metal with ‘Take Me Higher’, which sees Ailyn also deliver the first performance which somewhat approximates that which we would expect from her back catalogue.

Her Chariot Awaits is definitely an extremely interesting collaboration, one which defies, somewhat, the norm you would expect from a Frontiers-led project. But, then, variety is most definitely the spice of life, and this album definitely added some well-needed spice to my day.