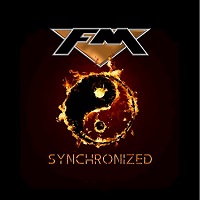 I must admit that, over the 35-plus years of their stop-start career, I have always found Brit AOR overlords FM to be a much more impressive live act than as a recording entity. Yes, they have produced some magnificent tunes over the years, some of those in turn quite rightly regarded as classics of the genre, but, overall, I have always found their recorded output to be patchy, not least in terms of being unable to reproduce the sheer power of their live performances. And, I am sorry to say, that this, their 12th studio album, originally due to be released last month but delayed due to the effects of the Covid-19 lockdown in Italy, does nothing to change my opinion.

Now, before the hate mail starts, the above statements are no way designed, or meant, to denigrate the artists concerned. There is no doubt that Steve Overland is one of the finest singers of his generation, and a master songsmith, while (especially live) Merv Goldsworthy and Pete Jupp have consistently proved their pedigree as one of the tightest rhythm sections in the business, a combo 99.9 per cent of bands would gladly sell their backlines to have in their ranks; relative NKOTB Jim Kirkpatrick (well, he’s been in the band for only the past decade) is another consummate musician and one of the best in the melodic rock genre, especially on this side of the Atlantic. But it just seems that, as soon as they enter a recording studio, they check their collective balls at the cloakroom, as much of the energy and power of their live shows dissipates into the atmosphere.

Part of the problem with ‘Synchronized’ is that it sounds dated, especially in the production department: it’s just a touch too cheesy, twee even. Yes, it has its good moments: things do start promisingly with the opening title track, which has some very tasty crunch to the guitars, although they are just a little too low in the mix to live up to their full potential to kick off proceedings with a bit of “oomph”. In fact, the album doesn’t really pick itself off the floor until third track ‘Best Of Times’, which is perhaps surprising given the fact that it is acoustic-led, and the classic-style first ballad, ‘Ghosts Of You And I’. ‘Broken’ and ‘Change For The Better’ are both another massive look over their shoulders to their first wave of success in the Nineties, the latter closing out the first half with a bright breeziness which so far has been missing, offering hope that the rest of the album might live up to its title…

And ‘End Of Days’ kicks off the second half as potentially prophetically as ‘Synchronized’ itself did the first, with a stabbing riff that cuts out of the speakers like a hot knife through butter; but, unfortunately, once again, the momentum is quickly lost in a morass of an Eighties blockbuster soundtrack filler: you know the scene… it’s the one where the hero drives up into the hills in the vain hope of getting past first base with the leader of the cheerleading squad… yep, that’s the song! Fortunately, ‘Pray’ restores the equilibrium somewhat, defying its title by delivering the album’s heaviest – and most powerful – song, complete with another superb vocal performance from Overland, who always makes everything he sings sound so effortless, and does so on every one of the 12 tracks, more than making up for the vast majority of its otherwise inherent faults, as he exemplifies towards the end of the album with the majestic ‘Angels Cried’, which he truly elevates with the assistance of some beautiful backing vocals and a neat slide riff from Kirkpatrick.

I’m not saying that ‘Synchronized’ is a bad album, because it’s not. Far from it. It is a good album; as highlighted, it is a very good one, in places. One which delivers exactly what you would expect from FM and will no doubt more than satisfy long-term fans of the band and their style of melodic rock. What it will not do is change any pre-existing opinions, mine included.