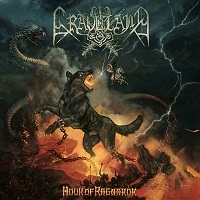 Norse mythology has provided us with a rich source of inspiration for metal music for almost as long as metal has been a thing, with some bands even basing their entire image around it. The only issue with that is that there are certain bands who have done this so well that they tend to overshadow smaller bands who draw from the same inspiration, however this tends to lead to those bands getting creative with their musical stylings and stray away from melodic death metal so as not to be labelled a “bootleg Amon Amarth.” One such example is Graveland, who are a band who have taken the myths of the Norsemen and taken them in a darker direction with their epic, yet blackened, metal take on the end of the world with ‘Hour of Ragnarok’.

‘Hour of Ragnarok’ captures the energy and severity of the myths leading to the ultimate destruction of the Aesir in sound that is, at its core, black metal. But to simply label it as such and move on would be to do this album a disservice as Graveland also introduce elements of nordic folk music with traditional instruments and chants which transforms this into something that reaches the epic proportions that Ragnarok deserves. It’s a sound that is clearly influenced by early-1990s Bathory which is probably why it is right up my street. The blast beats come thick and fast at all the right moments, and these are often interspersed by epic sections of music that bring symphonic elements into the mix to enrich the experience. The vocals are harsh and gravelly, bringing a sense of foreboding and doom that invokes images of the world in flames as Surtur razes everything to the ground.

The album opens in a particularly bombastic manner with ‘The Wolf of Twilight’ (referring to Fenrir, of course). Orchestral sections pair with the frenetic drumming to create something that would fit in well as the score for an epic fantasy battle scene, which in a sense is what is being portrayed! This is certainly a strong way to start the album and was pretty effective in hooking me along for the ride into the depths of the action. At 6 minutes long this has plenty of twists and turns to keep you enthralled but I think the most captivating part is the vocals here, as they have such a nasty and foreboding vibe to them that makes it all the more fitting for the core theme of the album.

This is then followed by the seriously heavy title track, ‘Hour of Ragnarok’, which is one hell of a beast. This tones down the symphony, although some remains, and instead leans into the blast beats to deliver some chaotic energy. It serves as a great contrast from the previous track while maintaining the cinematic nature of the album in its delivery of the myths. It’s the kind of track that makes your hands spontaneously adopt a claw-like position and you have the urge to re-enact Immortal poses, some might call this pretty fucking krieg!

All in all, ‘Hour of Ragnarok’ is an epic, dark and mysterious take on the end of all that we know. Much like Bathory, it combines raw black metal with epic symphony to provide an experience that will stick with you long after the album is over. It’ll come as no surprise that I say that this will appeal to fans of Bathory, but also those who appreciate (or are intrigued by) the combination of blackened metal and epic symphony. Hell, even metalhead Norse mythology nerds (like me) will also find something worthy of listening in ‘Hour of Ragnarok’.