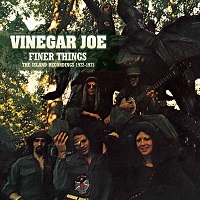 Vinegar Joe, it could be argued, were one of those bands whose sum of their parts was greater than their whole. After all, they are the band who gave us both Elkie Brooks and Robert Palmer, both of whom went on to enjoy greater success than with the band with which they initially made their name. It was a band whose flame shone brightly, as this re-issue of their entire back catalogue of three – yes, just three – albums proves.

It is somewhat unfortunate that Vinegar Joe have become something of a footnote in the history of the British r’n’b movement, simply because of the success later found by the band’s co-singers. Were they just victims of circumstance? Maybe. Record company alacrity, or laziness? Quite possibly: after all, Island Records was home to the likes of Free at the same time that VJ were trying to capitalize upon their live reputation by emulating their achievements in the studio… Whatever the circumstances, the band never quite managed to capture the apparently fiercesome intensity of their gigs in the rather more refined and staid constraints of the recording booth.

Nevertheless, these three albums – their self-titled debut, ‘Rock N’ Roll Gypsies’ and the premature farewell ‘Six Star General’ – all remastered with a level of stunning clarity, do hint at the influence which the band had on the ÜK r’n’b scene, from the gritty yet fragile vocals that led to Elkie Brooks being referred to as the “British Janis Joplin” to Pete Gage’s wondrously laconic slide guitar work, produced at a time when most guitarists were following in the footsteps of Hendrix and trying to cram in as many notes as possible but instead integrating the gentility of SoCal psych-pop into funk-infused heavy blues miens. The SoCal influence is extended further into the band’s sound at the points where Brooks and Palmer duet, such as on the debut album’s cheekily titled ‘Ride Me Easy Rider’ and the proggy, keyboard led lazy Sunday afternoon vibe of ‘See The World’.

Ironically, by the time the band reached their third album, they were starting to enjoy a small taste of the commercial success which had eluded them over the previous three years, with the single ‘Black Smoke Rising From The Calumet’ in particular establishing Brooks as one of the most powerfil and evocative voices of her generation; but, external forces and internal differences led to the members going their separate ways… and the rest of that story is told elsewhere in the history of rock ‘n’ roll – which, like life itself, is littered with examples of “coulda shoulda woulda”, as we say in this part of the Überverse. Vinegar Joe were one of those examples: they could have been bigger, and they really should have been, but they would have needed better backing, particularly from their record company.

As it is, all we have is this fine archive to remind us of the merits of one of the unsung lesser characters, oft undeservedly overlooked in the generic lore. Finally their story has been completely retold, and we’re all the richer for the experience of revisiting ignored gems such as ‘Avinu Maikenu’, ‘Live A Little, Get Somewhere’, ‘Buddy Can You Spare Me A Line’, ‘Rock N’ Roll Gypsies’, ‘Proud To Be (A Honky Woman)’ and ‘Stay True To Yourself’.