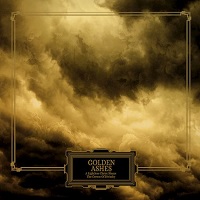 Prolific multi-instrumentalist Maurice De Jong, primarily of Gnaw Their Tongues, has come out with a new album for side project Golden Ashes.  ‘A Lightless Christ Shuns the Crown of Divinity’ features eight tracks picking up on the vein of the previous releases under Golden Ashes.  Mixing an intense foundation of raw black metal laced with orchestral style synth layers.  Conceptually, it seeks to build upon the Christian myths and texts elements of previous albums.

Opening with the title track, two things are instantly apparent.  Firstly, we’re not getting snappy, catchy one-word titles.  Secondly, we’re not getting snappy, catchy metal.  Immediately the album launches into a swirling vortex of blast beat drums, overdriven guitars and vast, sweeping synths.  Indeed, the texture is of such a thickness that it is difficult to pick out any vocals at times.  Initially the sound comes across as an impenetrable cacophony, but it is possible to pick out chord progressions and the hint of melodic direction hidden amongst the crashing raucousness.

The album progresses much the same from the opening track.  There is no let up from the heavy hitting sound of intense black metal married with the thick textured orchestration of synth pads.  While the sound is wide and expansive, the tracks bleed into one another with the lack of dynamic or melodic shift allowing for any standout moments.  While this does allow for a free-flowing thematic concept for the album, it can lead to the sound growing wearisome as there is not enough to generate sonic interest or captivation.  The stylistic concept of the black metal genre has been captured excellently with all the elements presented well, however the synths on tracks such as ‘Bewildered We Watch the Christ Ascend’ and ‘The Essence of Your Body Became Celestial’ become overbearing on the rest of the instrumentation and dominate the production to the detriment of the tracks.

With previous Golden Ashes work, there has been something more to latch onto and decipher after the initial listen.  De Jong is great at creating a swirling maelstrom of music that has an overriding essence of heaviness but there has been the ability to access the albums and tracks and find a focal point.  With ‘A Lightless Christ…’ it feels like the access points are blocked and therefore this is album that many may find to be inaccessible.  Those that are familiar with the previous work and how the music has progressed will be able to identify the key elements at play here and see how it builds.  However, the overall feel is a bit flat to the casual listener with the production and mix lending too much weight to the synth and soundscape. The result overwhelms the musical input of the instrumentation and therefore the album loses itself in a hyper extended grandiose noise.